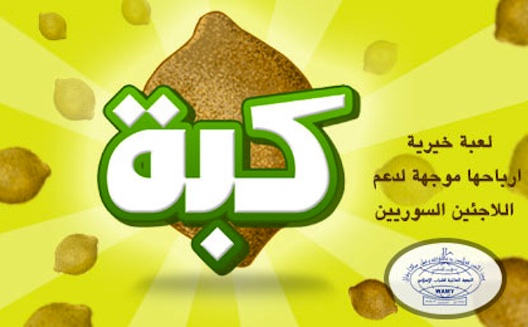 The goal of Kubba, an online Flash-based game, is to successfully run a stand that serves the popular Levantine dish made of ground meat covered in fried bulgar. You must cook the kubba but not overcook it, and continue to upgrade the store to better serve your market.

"This is our way of trying to give back to the community, and demonstrate social responsibility," says founder Abdullah Hamed. "We're doing it the way that we know best, through games. We wanted to create a game inspired by a Syrian dish. Any profit that we get will go completely to charity."

The game is actually inspired by a very similar GameTako game, called Tamiyyeh, after the Egyptian word for falafel. Yet by running this version of the game, inspired by a Syrian dish, "we really hope that people get inspired to create more games for charity, and help us donate as much as possible to the refugees," says Hamed.

Players will play for free, but any ad revenue generated by ad clicks during game play will be donated to WAMY, the World Association of Muslim Youth, the only organization in Saudi Arabia that is authorized to donate to Syrian refugees throughout the region.

Check out the game here and let us know what you think.