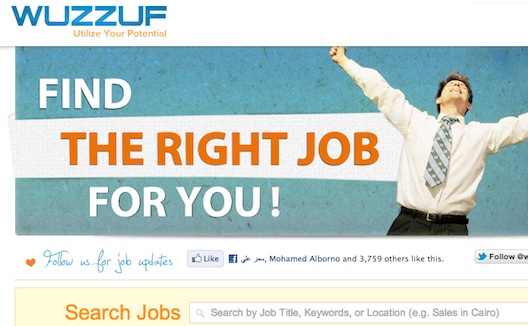 In the job search market in the Middle East, new sites are always looking to solve the signal-to-noise problem, plucking useful applicants from the deluge of irrelevant "kindly find attached my CV for your consideration" emails that companies seeking employees in the region are bound to endure.

Wuzzuf is the newest job search startup on the block- and also one of the oldest, the outcome of a recent merger between young startup BasharJobs and established giant Careermideast.com, which launched over a decade ago.

Linking the best of the old- a large database of over 200,000 users- and the new- an advanced algorithm honed to match job seekers to jobs based on 30 criteria, the site hopes to provide an accurate, honed job search experience, by taking into account seekers' years of experience, location, background, industry, salary, skill set, and descriptions of how one attained those skills.

The merger is a post-revolution story: after its launch in January 2011, BasharJobs did the best it could to build a userbase, yet had difficulty thanks to the political turmoil. By January 2012, it managed to bring 20,000 job seekers online and post 500 jobs, yet "it was a very difficult environment for startups," says co-founder Muhammad Algarhy. "We wanted to try anything that could sustain BasharJobs."

Careermideast.com approached the startup, looking for a way to revamp its platform. After Orascom's sale to Russian telecom group Vempelcom, the company was placed under the umbrella of OTVentures. After over a decade in the business, its traffic was tailing newer sites Bayt.com and MonsterGulf, and rebranding away from old systems likely seemed an imperative in a new Egypt.

When offered a deal, BasharJobs bit. It's not an acquisition, says Algarhy. The two companies' assets have been merged, and products are shared, but the BasharJobs team will continue to work independently to perfect the site's matching algorithm, while the Careermideast.com team will handle the marketing and fund the platform.

New platforms like Laimoon and Gradberry have attempted to breathe fresh air into the job recruitment space by focusing on a specific vertical, but thus far neither has seen a lot of traction. Nabbesh is another newly launched startup that offers an algorithm-based approach, with a unique skill-set-listing approach that allows job seekers to stand out as individuals, yet it's also focused on a segment: freelancers.

Wuzzuf's hope is simply to take back market share by building upon the traction that Careermideast.com already has, and improving its signal to noise when it comes to presenting the most relevant job seekers to recruiters. While Bayt.com remains dominant in the MENA job search market, Wuzzuf presents a new experiment in the sector; we'll watch to see whether a new algorithm can transform an existing platform.