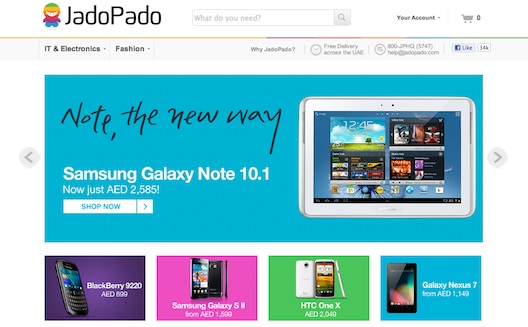 When we first started off, I kept asking "why hasn't anyone done an Amazon-style site in the region?" says Omar Kassim, founder of electronics e-commerce site JadoPado.

This was March 20, 2011, before Rocket Internet Amazon clone Mizado had entered the market only to close within 6 months. But where Mizado struggled, JadoPado did $1.2 million in sales during its first year and continues to grow steadily.

The trick? Really quick turnaround. JadoPado can satisfy most customer technology cravings the same day. If you place an order by 3pm in Dubai, you can choose a 6-9pm delivery slot. In Abu Dhabi and Sharjah, most orders can also be delivered same day, with some being delayed until the next morning depending upon the order time.

"Electronics is a competitive space. We believe that we need to get things out to consumers as quickly as possible," says Kassim. They now see around a 1% return rate.

JadoPado can operate this quickly for two reasons: it stores its inventory locally in the UAE, and it handles its own logistics.

Because it's relatively easy to ship products to Dubai, the company is able to keep a low amount of inventory upfront, which it replenishes 3 times a week. It also has its own fleet of vans. "We really wanted a process that we could control," says Kassim. "So we hired some people, bought some vans, put stickers on them, and spent some time on training. Initially it was fairly off-the-cuff, but we were able to hire people with a great attitude."

They also now handle their own cash on delivery. "For the first three months, I was in denial. I said, let's not do COD. Then I relented, and it had an immediate impact on our business. It's 40% of our business today," says Kassim. JadoPado still uses Network International for all online payment options.

The business is now growing, around 10-15% month-by-month, mostly using word-of-mouth and social media engagement, working with a team of 15. When asked if he ever thought about offering daily deals, he responds, "We actively avoided it, to be honest. We do offer discounts, though."

Despite sounding experienced, Kassim is only 27 years old. He's built JadoPado from his own vision, primarily funded by investment from Al Bogari Holdings, a Sri Lankan-based holding company run by his family (he's also originally Sri Lankan). He's been running and restructuring the family business locally for 5 years, yet decided to launch JadoPado out of a desire to do "something in the tech space."

Inititally Kassim wanted to launch an incubator, but couldn't set up the right pipeline. Then, he looked into e-commerce and saw an opportunity in the lack of players. Even as competitors entered the space, he was unfazed.

"It's not about the idea being taken. This business is about execution. I think what a lot of people don't realize is that you can clone Amazon but you have to clone their entire infrastructure. In the beginning, Jeff Bezos was packing stuff himself, and they were holding inventory almost from day one. They have 65 warehouses. It's an easy design, but hard to clone that infrastructure."

For JadoPado, the next step is to expand to the entire Gulf region, setting up the infrastructure to replicate its warehousing and logistics solutions. From there, it will a debate as to whether to go fully regional or head to India first.

When it comes to Mizado exiting, it's an opportunity, but not quite a celebration. Watch Omar's take on why they're shutting down and his comment on the recent shifts in the e-commerce sector.