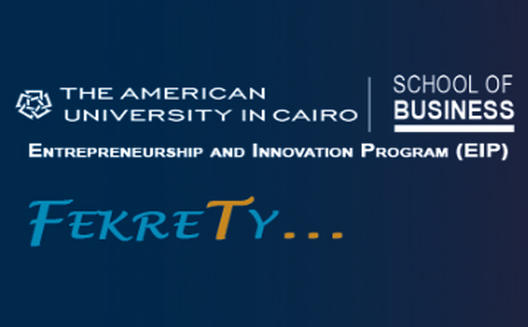 Fekrety, the national business idea competition organized by The American University in Cairo’s School of Business – Entrepreneurship & Innovation Program (EIP), is nearing the end of its semi-final stage and round three looms.  The teams have been working hard and the excitement levels are increasing.

The EIP’s drive to help, discover and encourage new ideas and entrepreneurs across Egypt started in March by marketing Fekrety to all universities across Egypt. Any Egyptian could enter as long as they were between 18 and 30 years old, and people could enter their ideas as individuals, or as a team, with a maximum of 4 people per team.

Round 1 started with 350 ideas submitted online. Surprisingly, 40% were not IT or tech related, but 27 industry sectors were covered overall.  The education, healthcare, media, social, alternative energy, and recycling sectors were the two most subscribed to, in that order, perhaps showing us what Egyptians view as the top priorities to develop the country.  A quarter of the entrants were women, and while that percentage could be larger, it’s still a healthy percentage. Three hundred and seven teams were selected to go through to Round 2.

Round 2 is where the hard work started.  All the teams, comprising nearly 700 individuals, received two weeks of training in the form of workshops, lectures, and mentoring by AUC faculty, industry experts, investors and seasoned entrepreneurs.  This was to aid the teams in preparing the first draft of their business plans and 2-minute business pitches.

Forty seven teams, chosen by the 16-strong judging panel, made it to the semi-final stage at the beginning of August.  These teams began Round 3 on August 13th, undergoing a further mentoring session in preparation for submission of their final business plans yesterday on the 25th of August.  The competition will end on the 13th of September with a Demo Day, where the finalists will show off their creations to the judging panel, industry leaders, and faculty.  They will also get the chance to pitch to potential investors. Ten winners will be chosen to receive prizes such as 50,000 EGP in cash, and incubation, among others.

During each stage of the competition, the teams have been judged on the following criteria: how innovative the idea is, how much customer value is generated; how clear the business model is; the ease of implementation, how scalable the business is, and how profitable the business could be.

Fekrety has been the biggest and furthest reaching contest organized by the EIP, and the final Demo Day will bring together the leading lights of Egypt’s entrepreneurial ecosystem.  We’ll have to wait until then to see whether the EIP’s vision of becoming a hub for innovative idea generation is being fulfilled.