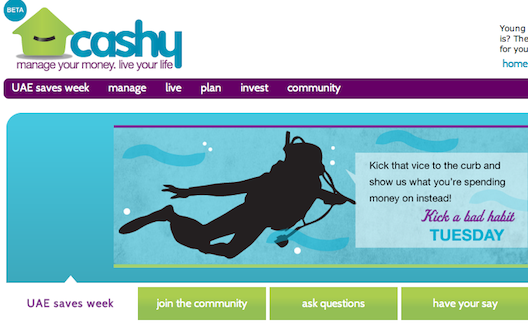 Can saving a few dollars a day build a more stable society? Nima Abu Wardeh of Cashy.me thinks so. But when she first came up with the idea for the financial advice website, she recalls, “I didn’t understand what money should be doing for me.”

She found herself wondering why she wasn’t better with day-to-day spending despite being a well-educated career woman running a weekly program on the BBC about finance in the Middle East (“some people have 5 kids and 1 job, but I have 5 jobs and one kid,” she jokes). Yet cash blindness seemed endemic in Dubai; friends also seemed to be spending out of control and suddenly facing a tough realities.

“When the credit crunch hit, people were saying to me, I have eight credit cards and a pile of debt; should I run away?” she recalls. Writing a bounced check is a criminal act in the UAE; what would be a headache for houseowners elsewhere is simply illegal under Shariah law. Abu Wardeh realized then that mismanaged money was a core issue affecting happiness across society, hardly limited to her peer group.

She then launched Cashy.me with the intent of providing free financial advice that could help anyone determine how to manage their money, save a bit, plan for the long term, and understand investment. The articles, including cashy.me’s explanation of UAE debt laws (illustrating why it’s better not to flee), are straightforward, making topics from stock market forces to the role of emotions in overspending clear and concise.

The site isn’t a one-woman show; creating a community is also a large element of Cashy.me. “I designed it so that we all learn from each other,” says Abu Wardeh. Readers can ask questions of each other, Nima herself, or Cashy’s team of 50 experts and writers.  There’s no membership or payment; the goal is to provide information completely free,” she emphasizes.

This week, the site has launched “UAE Saves Week,” a campaign designed to help the population save by completing fun tasks. Yesterday was “Pack Your Lunch Monday;” today is “Bad Habit Tuesday,” on which readers are encouraged to list an indulgence that might be draining extra cash. “Say that bad habit is costing you $30 a month; over the year, that could be a SCUBA diving course. It’s all about figuring out what you really want for yourself, and what enriches your life,” she says.

It may seem basic, but Abu Wardeh’s goals are anything but narrow. She wants to effect social change by encouraging citizens not to fall into default spending just to keep up with the neighbors or because they aren’t paying attention. She envisions a world where “It’s cool to stay at home. It's cool to think about your future. It's cool to say ‘I can't afford it.’ And it's cool for a woman to say ‘I want to understand how these finances work in this relationship.’”

On the last point, Abu Wardeh recently spoke to a class of 82 Emirati women following a mullah’s assessment that divorce rates in the UAE were due to women spending household money on handbags and shoes, she recalls.

As it turns out, many of them actually agreed with him. As they revealed that they didn’t look after their own finances, they began to realize that they wanted to do so. The trick, she says, is getting families to understand that this isn’t being “difficult,” but that it’s part of teamwork.

Cashy’s goal over the next year is to expand the “Save Week” concept into other Arab countries, to spread its message and, just maybe, quietly enhance societal stability by encouraging awareness.

“I’m not wagging my finger,” says Abu Wardeh. “That would be boring. This original content is simply about collaboration. If you cannot sustain a decent live for you and your loved ones, it’s game over for everyone.”