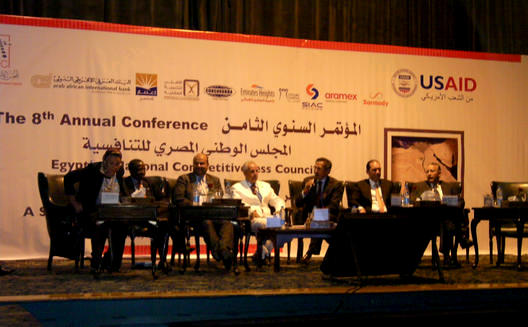 I like to challenge my prejudices every now and then, so I decided to accept an invitation to the eighth annual conference of The Egyptian National Competitiveness Council (ENCC) on Tuesday September 18th. The title of the conference was “A Sustainable Competitiveness Strategy for Egypt,” and, being the first conference after Egypt’s election of its first civilian president, I went with the hope that I would learn of all the great things the government is doing to aid growth, and therefore entrepreneurship as well.

My first impression was not good; the reception area was filled mainly with middle-aged men in dark suits.  I’m a firm believer that competitiveness is based at least partly on innovation, so a mass of not so young people in a dour uniform does not point to an innovative mindset to me, but I decided to keep my prejudices at bay and seek out some coffee.

Coffee in hand I went into the conference hall to be greeted by the huge banner above the stage, where the main sponsor of the event, USAID, had a logo that dwarfed all other logos, including that of the ENCC itself.  Let’s leave politics aside, I’m not against foreign investment and involvement (let's face it, many Egyptians think of me as a foreigner), but a logo that size from a foreign charity does not, on the face of it, look like it's encouraging sustainability or competitiveness; it looks like charity. It served as an obvious reminder that the ENCC’s flagship event relies heavily on foreign aid; I would have liked to see more confidence in local structures.

Two uncompetitive coffees later and the event eventually started, nearly an hour late.  The ENCC Chairman Seif Fahmy, in his opening speech, made a point of apologizing for the late start, but added insult to injury by half-jokingly excusing the lateness because “Egyptians weren’t used to being competitive.”  Not only is that attitude defeatist, patronising, and plain wrong – I've been lucky enough to personally meet hundreds of motivated and competitive Egyptian entrepreneurs – but you'd hope that, in the name of competitiveness, the ENCC would have tripled its efforts to ensure that its flagship event started on time.

Then again, it's not devoid of truth; at least 28% of the workforce in Egypt is employed by the government (source: LABORSTA, an International Labour Office database).  Even in the most developed or wealthy nations, government bureaucracy isn’t typically known to be a hive for breeding competitition, so this will be a hurdle to overcome.

The sessions that followed all covered wonderful topics: maximizing social inclusion, achieving food security, getting the most out of the Suez Canal, investing in people and innovation, and using existing challenges as opportunities to create jobs and economic growth. Unfortunately the infographics were illegible, and of the nearly 50 speakers and panel members, the number of entrepreneurs among them could be counted on the fingers of one hand, and you’d still have a finger or two left.

One attendee, a professor from Ain Shams University, asked one of the ministers a question that summed up the whole event nicely.  She said, “I’ve been to lots of lovely conferences, with lots of nice words, but there’s been no positive change to unemployment; when are we going to stop talking and start achieving?”

Real results count, not fancy titles or fancy talk.  If anyone from the Egyptian government is reading this, you don’t need letters before or after your name to know that small businesses, and therefore entrepreneurs, provide the bulk of employment, innovation, and competitiveness in any economy of note.  Don’t take my word for it, ask a professor of economics.

The government is an easy target for my criticism; I know this, but it’s still right to do the easy thing when needed.  To end constructively, I’ll say the government will find a much more receptive ear to its policies when it shows it’s made itself sustainably competitive.  All the government has to do now is make the economic environment viable for entreprenueurs, then get out of their way.