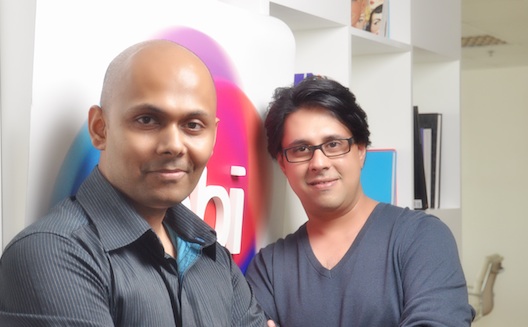 How many Dubai startups have turned a profit within a year of launching?

User experience design and user interface (UX/UI) agency RBBi (Red Blue Blur ideas) is one- after launching just over a year ago in June 2011, it has managed to quickly build a name for itself by catering to high end clients and focusing on user experience.

Taking a unique approach and focusing on data is what sets RBBi aparts, explains co-founder Amol Kadam. "People have been talking about the challenges of e-commerce from every angle except for user experience design. But UX is the missing link."

The young startup, the only digital agency within the region listed with UXPA (User Experience Professional Association Worldwide), was able to land its first major client,  Dubai Properties Group, beating out some of the top digital agencies in the region. When pitching, both Kadam his co-founder, Devesh Mistry, "put the users first rather than putting together nice-looking designs. We never pitch leading with designs, but lead with user feedback."

The UX/UI consultancy never uses less than 20 users to test a given project, he says. Removing roadblocks to understanding is key; on digital user interfaces (e.g. websites, applications etc.), Kadam explains, a long information form can put users off. Or, in a multicultural population like that of Dubai, not using the most common words for a given element can breed confusion. "Just by doing research, we discovered that most users are comfortable with the word 'rent' rather than the word 'lease,'" he illustrates.

It's small changes like this that enabled RBBi to land deals with some of the regions most popular brands, from working on corporate websites and e-commerce and intranet portals, to launching digital activation campaigns in the social sphere.

Kadam and Mistry's success seems to have come from their dedication to hard work as well as their focus on owning their niche. "No one in the region is focusing on usability the way that we are," says Kadam.

Kadam was with FP7 (Fortune Promoseven) in Dubai for over six years, having previously worked in Singapore. Mistry moved in to UAE after a decade’s experience working in Australia, and joined FP7 where he met Kadam. “Within a year, the desire to create RBBi was born, primarily out of the need to focus on 'doing things right' for the clients and creating rich 'experiences' for end-users,” says Mistry.

Once they decided to set up their own company, they had to deal with the frustrations of registering (they chose to register in the Jumeirah Lake Towers Free Zone; see more registration resources here) and waiting three months for the paperwork to come through.

Once it did, RBBi designed all of their own furniture and settled into a "simple, Zen workplace that's all white with a view from the 32nd floor" that "encourages creativity," they describe.

They've now become an inspiration for others. "Since we started, many of our friend have said, these guys did it, why don't you follow them?"

JLT has also followed suit by improving its registration process it seems- "it's gotten much faster for our friends," says Mistry.

RBBi's success may seem relatively quick, but it's clearly due to the culmination of over a decade of experience working with global brands for both Kadam and Devesh; experience does pay off.

Stay tuned for more of RBBi's UX/UI tips on Wamda.