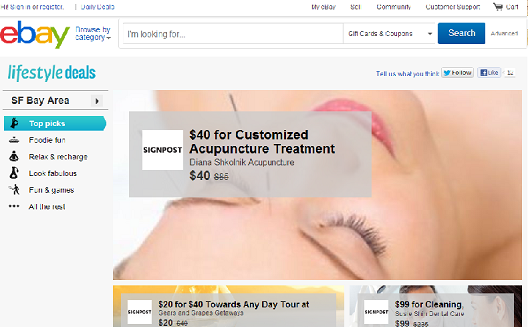 After news of changes at Cobone and Groupon UAE yesterday, more is shifting in the daily deals space globally, with eBay's launch of “Lifestyle Deals,” a daily deals platform in the U.S. set to challenge the likes of Groupon and LivingSocial.

Hoping to increase its sales alongside a complete redesign of its website, eBay is quietly beginning to unveil the platform in a few cities across the United States including San Francisco, Los Angeles, and Washington, DC.

Though eBay has been experimenting with daily deals for a few years, this is the first time they are offering discount services to consumers, teaming up with startup Signpost to arrange localized deals. Backed by Google Ventures, Signpost also provides deals for Google Offers, another Groupon rival.

Perhaps this entrance highlights a new trend, one that could give daily deals-only sites a new reason to worry. Traditional e-commerce sites may start taking daily deals into their own hands, offering consumers a one-stop shop for regularly-priced goods and one-time deals.

Local e-commerce sites have the logistical and cultural experience to effectively sell and ship to consumers in regions like the Middle East and North Africa; if they begin to fold daily deals into their own business model, they could make deep cuts into the market of traditional daily deals platforms.

It is becoming increasingly clear that the daily deals market in MENA presents some unique challenges for expanding businesses. If companies like Groupon, Google, Cobone, and now eBay want to increase their business in the region, they will increasingly have to adapt or rethink the traditional way of doing daily deals.