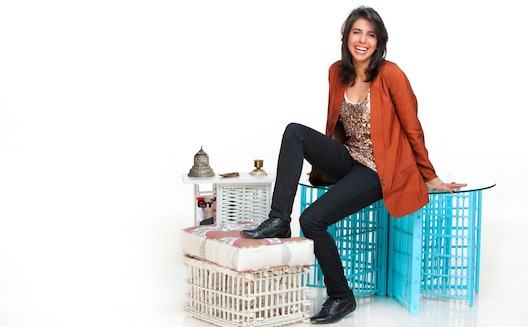 For those of us that have seen one too many mobile apps and tech-focused startups, here’s a breath of fresh air: a small idea combining art, heritage, environmental sustainability, and personal passion, that grew to be an inspiring startup in Egypt: Studio Meem.

Studio Meem builds furniture with identity. With locally-sourced palm fiber, or gireed crates, as its main resource, the design company combines low prices, support for local tradition, and environmental friendliness. “The main idea for the project is to work with artisans in different fields, producing modern objects that can be used for smaller products; home accessories, furniture, or even architecture,” explains founder Manar Moursi.

The “Meem” refers to the thirteenth letter of many Semitic languages, a name assumed to come from the Egyptian hieroglyphic symbol for water, which the Phoenicians later used as their word for water, mem. Adding a “meem” to words in classic Arabic in some cases transforms the meaning into a place. “It’s not just the first and last initial of the studio’s founder, but its beauty lies in its power to linguistically make words into places, its relationship to nature, to the ancient Egyptians – but also the nomadic and multi-cultural connections it speaks of,” Manar once blogged.

While Moursi pursued a dual Masters degree in Architecture and Urban Planning from Princeton University, she found herself constantly thinking about her home environment.  “I wanted to start by using the gireed,” she said, “I started to collect recycled crates in my house, from the market or streets, or wherever I found them.”

Gireed, or palm fiber, is readily available in Egypt, more so than wood, and was traditionally used to make furniture, but fell out of popularity as a manufacturing material. With almost 20 million palm trees in Egypt and 1 million tons of waste annually from these palm trees waiting to be used, Moursi realized the opportunity.

“It’s a local material from the country, it is environmentally sustainable, and it’s a very beautiful craft for artisans while being traditional,” she adds. Moursi hopes to reinstateme appreciation for gireed as a native, authentic furniture material.

Moursi wasn’t the only one who saw this potential; she won the Red Dot Design Award and a Good Design 2011 Award from the Chicago Athenaeum after showing some prototypes. Studio Meem was also selected as one of 10 finalists in the MIT Business Plan Competition, where Manar received help with her business plan and enjoyed the feedback.

As she unveils the site in the next month, Moursi is placing an emphasis on sales, building an capable marketing team for Studio Meem. She’s planning to increase the studio’s network of artisans by offering increased revenue sharing, and plans to attract a broader client base with auxiliary services like interior and architectural design. “I like to think about the company as a research-driven lab,” she says.

After self-funding the company, Moursi is also looking for investment, hoping to secure a deal by the end of the year. “A lot of the entrepreneurial support is geared towards tech stuff,” she laments. “For Studio Meem – more focused on an artisanal local environmental idea – there is less interest from startup and business accelerators.” Non-tech projects shouldn’t be overlooked, she says.

What ultimately makes Studio Meem stand out is its innovative ability to combine old and new to generate an ongoing social and cultural impact. Her family may have doubted her idea, but Moursi’s pioneer spirit is what truly shapes the company. “Risks are ok, and it is ok to lose!” she exclaims. Failure is not something to be feared, she says. “That’s how I learn and grow.”