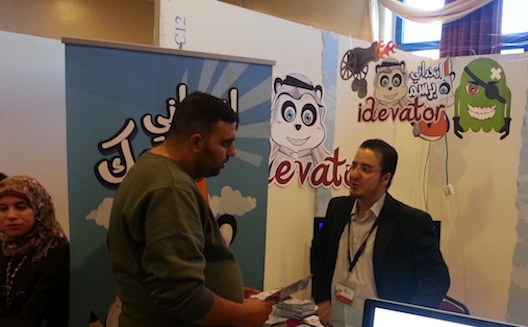 On Tuesday in Ramallah, Expotech 2012 opened its doors marking the ninth year for the annual event, a weeklong celebration of Palestinian innovation and technical advancement.  The theme for this year was “The pledge for innovation” emphasizing the vision of the organizers, Palestinian IT Association (PITA), for a nation that would contribute to world knowledge.

This year, the exhibition was divided into dedicated exhibition zones, including zones for hardware solution providers, software companies, universities and governments displaying their latest technical advancements, and for the first time, a zone named iStart, dedicated to tech startups. The startup zone impressed many visitors by showcasing the early and quick success of the country’s latest startups.

Among those visitors was Prime Minister Salam Fayyad, who could be heard multiple times saying, “This is remarkable,” as he walked between the booths listening to the stories of the entrepreneurs.

The first day of the exhibition was a success- the exhibiting startups were extremely happy with the number of guests and variety of visitors attending the fairs. Some of the startups noted that they had received excellent feedback on their products and had already seen a significant increase in the number of downloads for their apps and traffic to their sites. It was also great simply for connecting entrepreneurs to support; Ayman Awartani from Idevator also indicated that he met some very interesting visitors including some experienced game developers whom he considered as role models.