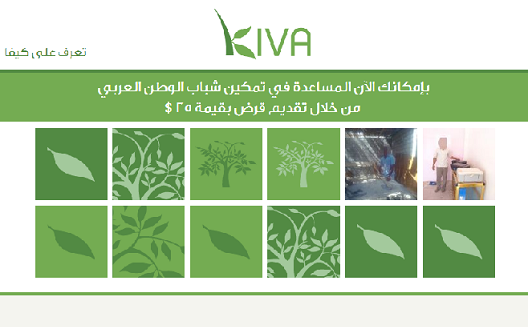 After partnering to create Kiva Arab Youth in April of this year, Kiva and Silatech have just launched a “microsite” in Arabic alongside a new social media campaign to further highlight the microfinance needs of young entrepreneurs in the Arab world.

Though Kiva has several field partners in Arab countries including Iraq, Jordan, Lebanon, Palestine, and Yemen, they have seen very low levels of interest in the Arab world to date – over 40% of the loans to the Arab world have expired unfulfilled.

Silatech saw an opportunity to reach this untapped and unfunded potential in the Arab world. In partnership with Kiva, Silatech has started a heavy online push for Arab youth projects and Arab lenders on the Kiva platform.

Previously, Kiva had created a channel on their site dedicated to Arab youth projects (under 30 years old), but now they're upping the stakes with the new Arabic microsite, which will highlight funded success stories.

Silatech is also incentivizing Kiva lending in the Arab World by offering to match the amounts that lenders pledge. Thus far, Sykes boasts that Silatech has mobilized $1.7 million in loans through the platform, matching 35,000 individual lenders and funding over 1400 projects.

One of the challenges of promoting loans in the region, that has kept rates so low in the Arab World, is that the concept of online giving is very young and credit card trust is low, says Sykes. Yet times are changing. Thanks to this recent boost, the average individual loan to these projects is around US $30-35, with an average total loan amount at around $1500 - now stronger than Kiva’s averages in Africa, Sykes explains.

Perhaps it's because of a generational change, he says. “The younger generation, particularly young professionals in the Arab world, don’t want to give in the way that their parents or grandparents gave," says Sykes. "They still want to give, they still want to have a charitable impact, and this type of platform offers a new way to do that.”