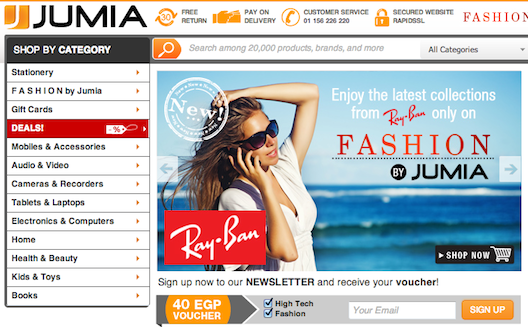 J.P. Morgan is continuing its trend of investing in Rocket Internet clones, today announcing investment in Jumia, Rocket's Amazon-style clone in Egypt, Morocco, and Nigeria, and Zando, its Zappos clone in South Africa.

The New York-based investment company will take a stake of Jumia and Zando through a German holding company in an all cash-for-equity deal.

The amount was undisclosed, but judging by J.P. Morgan's slew of recent investments this year, it's likely double digit millions; Dubai-based Zappos clone Namshi recently announced a round of $20 million from both J.P. Morgan and Blakeney Management and others have announced similar numbers.

Rumors say J.P. Morgan may have been the determining factor behind Rocket's closure of similar Amazon clone Mizado this August; it may have stipulated to the German startup factory that only one of each property type could exist in a given region. If the Middle East and Africa counted as one region, Mizado would have been redundant (and more expensive) than Africa-based Jumia.

Jumia opened in Nigeria in Spring 2012, and launched in Egypt in August, headed by a director of marketing and director of operations who used to work at fellow Rocket clone Lazada in Vietnam, along with a director of buying who joined after working at BCG Dubai. As Wamda contributor Omar Aysha wrote last month, the company is rapidly expanding and hoping to compete with Souq and Nefsak to become the top online mall in Egypt.

“This investment is a real turning point for Jumia, and e-commerce in Egypt,” Lamis Dessouky, Head of Public Relations, said in a statement. “With this investment, we will strengthen our current footprint, offering our customers more brands, more categories and more services as well as improving operations; we are among the pioneers of e-commerce in Egypt and this investment confirms that Egypt will become a very large market in the very near future.”

(Perhaps they can invest a little bit in improving the Jumia interface? Rocket is known for simply copying simple interfaces, but somehow Jumia looks a bit rough without the Lazada blue.)