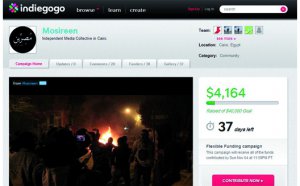 Hundreds of young men and women are spreading ideas, enriching the Arab entrepreneurial arena, developing the community, serving society in many ways. Yet there is no continuity of financial support.

Funding remains the major obstacle to any project’s durability, particularly when it calls for large kick-off investment. Where does someone get capital for a project and convince investors to invest, while maintaining their lead role and concept?

In the United States, social giving has become a key answer. Americans are keen on supporting good ideas, even donating their own money. Crowd financing demonstrates the collective effort to initiate and develop projects together. Kickstarter is one of the most popular funding platforms for creative startup projects – although exclusively limited to American-started ventures.

Why don’t we create our own Arab platform?

Beginning of this year, Jigar Mehta, one of the founders of 18DaysInEgypt, and Yasmine Elayat launched a fundraising campaign on Kickstarter and were fully funded. Yet most donors were not Arabs. According to Mehta, perhaps this crowdfunding culture is alien to our Arab societies that might not encourage the idea.

This is not true.

The term itself may sound strange. Its concept and definition, however, are inherent to our social giving-geared Arab society. According to a 2007 study on philanthropy in Egypt, the country retains its steady share of social giving and donations, reaching approximately US $1 billion every year – despite being swamped in internal and foreign debts of over US $200 billion.

Maadi Community Foundation’s chairperson Marwa Al Daly seeks to transform the concept of zakat endowment from giving to the needy into developing business, i.e. venture capital philanthropy. Al Daly believes there is no better feeling than that of owning the full propriety of an idea or project, or that of partaking in the process of building it and converting it from an idea to a self-sufficient reality.

One question remains however: How can we channel this enormous social wealth to better establish viral philanthropy?

Kickstarter’s statistics reveal it has raised US $350 million from 2.5 million contributors to finance more than 30,000 projects and startups since its inception in April 2009. In the MENA region last July, Emirati platform Aflamnah was the sole sponsor for feature and documentary artistic endeavors.

Although Aflamnah has sections for other projects, such as technology, publishing, gaming, photography, fashion design, etc… the film section seems to be the most active. Looking at the size of the funding that the platform received for its displayed films, the filming area is clearly not a priority for Arab donors. The website’s foreign touch in terms of design and English language use, make it sort of ‘westernized’ as well.

“Mosireen” is a Cairo-based media cooperative for the promotion of popular media and the Egyptian revolution. It launched, in mid-September, a crowdfunding campaign from Indiegogo platform. The campaign aims to collect US $40,000 to cover expenditures for film projection, workshop organization, revolution documentation and archiving, as well as a workspace. Three weeks later, Moserrin managed to raise US $5,000 from 60 investors, of whom 16 at least were Arabs, and the rest foreigners.

In my opinion, the Arab crowdfunding model of should be synonymous with development and renaissance – without attempting to reinvent the wheel; carrying on where others have fallen short.

The American National Public Radio (NPR) recently reported many complaints from large crowd funding sites the lack follow-up and failure to guarantee the project’s execution deadline – originally set by its initiators. In a similar fashion, some sponsors or donors criticize the absence of a serious project implementation, reclaiming their money back. Platforms haven’t integrated a reimbursement system yet – though Kickstarter has toughened its measures; projects are accepted on the condition that the creator depicts the risks and challenges arising during the work process, thus making certain they are implementing as promised.

What if the same system was to be integrated into an Arab platform, with an opportunity to implement a useful and serious project, without beneficiary interference?

The platform would take on board eminent Arab personalities serving as consultants and experts in a variety of areas, such as technology, development, media and art. It would then transform into a hub for national startup projects, embraced not only by nationals, but also by Arabs around the world.

The model would be very similar to that of Community Foundations that strives towards building capacities for the “poor benefactor”. According to Executive Director of the Global Fund for Community Foundations (GFCF) Jenny Hodgson, a lot of financial aid has been flowing from the North to the South for dozens of years. “What did this aid bring? What did it achieve? Is it the best means for development? It’s about time people build their future by themselves and not wait for donations from outside. It’s about time they take their future into their own hands,” Hodgson explains.