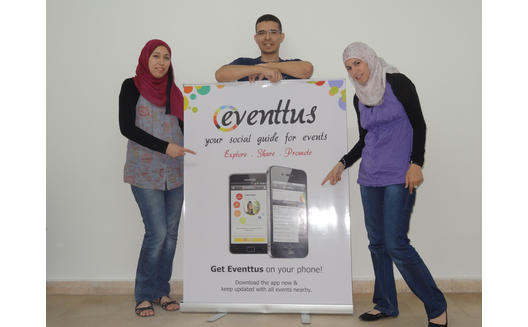 Events of all types are becoming a big deal in Egypt, especially amongst the younger age range.  More disposable income, more free time, and more personal freedom mean that more and more Egyptians are looking for an interesting event to attend.

Cairo based start-up Eventtus launched their events discovery website back in March and recently introduced their mobile app, so I visited their office in Nasr City to see how things were going.

“The business is seeing some income now, enough to cover costs, so that’s good,“ started co-founder and Chief Executive officer Mai Medhat, “but we’ve been mainly focussed on creating a great app and adding functionality to the site.  We wanted the app to be comparable in quality to any app available internationally, and we’ve been very pleased with the positive feedback from our users abroad.  They’ve told us they would never have guessed that an app this quality was made in Egypt.”  The app won England's Favourite Website Awards (FWA) Mobile Of The Day Award in early September.

The app is indeed very useful; it’s very easy to find events, based on any number of criteria such as location, category, or using their smart recommendation algorithm.  And it’s easy to find and follow other users and share one’s own information and photos both within Eventtus and on outside social networks.

They also have a very useful function called the Handshake, which is like a virtual business card exchange, except you exchange much more than mere contact details.  “We plan to add Near Field Communication (NFC) capabilities to the app, so people can just tap their phones together to Handshake,” added co-founder and Chief Product Officer Nihal Fares, “but before that I think releasing the BlackBerry version of the app is more of a priority.”  The app is currently available on Android and iOS.

Eventtus looks like it faces a lot of competition. Mai listed the main ones, “Cairo360, Eventgate, Meetup, Eventbrite, Cairoscan, and of course, Facebook.  But we’re different because we do not focus on a certain type of event or user.  We also of course understand this region more than the international players, and we’re free to use for both event attendance and the basics of event organisation.  Our dream is to be the global platform for event discovery and management.”

The website already has a lot of event organiser functionality, including the ability to create ticket forms with custom questions; the only key thing missing is the ability for attendees to pay for tickets, so far now they’ve partnered with TicketsMarche.  Higher up the priority list now is the inclusion of more organiser functionality into the app.  I would suggest also adding Arabic language support. as I doubt the service will get to the next level regionally if it relies only on English.

The personal transformation of the founders has also been important for its success.  The girls, with 3rd co-founder Ahmed Shreef, all come from an engineering background, so the science of business was unknown to them.  Nihal explained, “it’s been exciting learning something new, finding out how business works.  The biggest shock to us was finding out that the phrase – Build It And They Will Come – is not actually true!”

Mai added, “we did case studies of start-ups, and analysed what went right or wrong.  Then we read an article by the founder of plancast, which offered a similar service to ours, on why it failed, and we realised the way we are now doing things will avoid a lot of the pitfalls plancast fell in to.  On the business side we had several revenue streams in mind right at the start [such as event organisers paying to have their event featured], but user feedback has shown us which streams will be more profitable.”

One thing the founders all agreed to stick to at the start, was not to seek incubation or seed funding.  Mai clarified, “we knew the first few months would be spent doing research, so we didn’t think being in an incubator made sense.  And using our own funds gave us more motivation to work harder early on!”  Now they have a fully functional product and business, they’re happy to seek investment to expand to the next level.  Marketing costs money after all, and organic growth will only get you so far.

At present, Eventtus have thousands of active users, me included, and functionality-wise they certainly look like the regional market leader, so I for one hope they’re able to take the business to the next level.