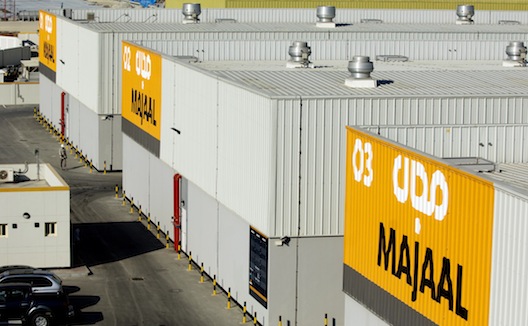 Speculating about the rise of tech companies is fun, but with e-commerce on the region on the rise, the seemingly mundane expansion of a warehousing business in Bahrain might actually be one of the region’s more interesting stories this year.

Majaal, which means “space” in Arabic, is one to watch, as it’s set to expand to make life easier for startups and multinationals both in Bahrain and the holy grail of Middle Eastern markets: Saudi Arabia.

But it’s not just e-commerce startups that need space; what sets Majaal apart from typical warehouses is its forward-thinking startup-friendly approach.

At its main warehousing center, situated conveniently at the intersection of the airport road and the road to Saudi Arabia, the average storage space is only about 250 square meters- “the ideal size for small and medium-sized businesses,”says founder Amin Al Arrayed.

“A lot of business were doing administration in an office, and warehousing elsewhere, or even buying residential housing and converting it into storage space,” says Al Arrayed. Now, startups can consolidate their operations in a single storage space that offers secretaries, legal support, onsite managers, forklift service, discounted internet and telephone rates, and even its own address.

“It’s very livable; you can build an office space here,” he says- and many have; the company counts 20 small business clients thus far. “We’ve been approached by gyms, and even restaurants that want to launch in our warehouses.”

In a market where many foreign companies are looking to establish central hubs to serve Saudi Arabia and enter the Gulf, one of Majaal’s central offerings is its security. With CCTVs in every unit, fire response systems, on-site maintenance, and outer security cameras, the company actively takes the risk out of starting a new business.

It also mitigates political and legal risk by offering “a hand-holding service” to walk new companies or branches through the process of registering with local municipalities. Since then, local stakeholders have begun referring companies to Majaal, says Al Arrayed, and increasing foreign direct investment by attracting foreign companies to Bahrain has been a point of pride for the 5-year-old company.

Launching after the global financial crisis

Despite its success, Majaal wasn’t the project Al Arrayed began in 2007. At the time, his real estate development company First Bahrain was working on an ambitious project across from the City Center Mall in the Seef district, for which he had gathered a high-powered team.

When the global financial crisis hit and the project was cancelled, Al Arrayed found himself camped out with a pool of restless talent in a Regus office, an international chain of set up, ready-to-rent offices.

Suddenly, the idea for a business-friendly warehouse struck- “if someone were to apply this model to warehousing, it would take off,” he recalls realizing. The team quickly performed a market study to determine the best location for SME-focused warehousing, and launched Majaal that year.

Now, the company is set double this coming year, adding an additional 12,000 square meters to its existing space in Bahrain, while plotting expansion into Saudi.

“The majority of our tenants have some affiliation with the market in Saudi,” says Al Arrayed.  “And at least half of sales in the malls in Bahrain go to tourists from Saudi and other Gulf countries.”

Expansion won’t be difficult for Majaal and First Bahrain, which are already Sharia-complaint, but the idea is to make warehousing easy for those startups looking to expand into the notoriously difficult Saudi market, a market Al Arrayed refers to as “cowboy”- “if you’re not ready for it, you’d better start in Bahrain.”

The company is now setting up international warehouses under a franchise model, under frameworks that follow international best practice.

Who knows what startups will build next in the new Majaal as it continues to evolve into a creative space. One women has even rented a 5x4m space simply to paint in, describes Al Arrayed. “Nobody ever imagined this in the beginning, but if you build a warehouse with a human element, you make a very usable space. We continue to be surprised.”