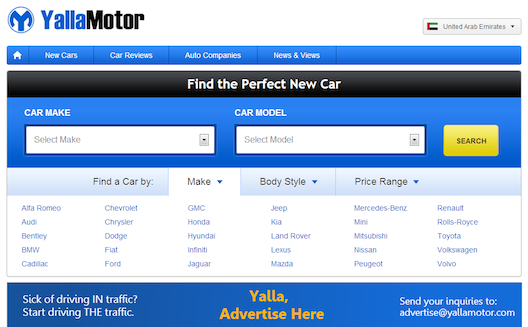 Review sites are all the rage lately – combine that with a deep-seated passion for cars in a region with disposable income to spare, and you’ve got yourself a market primed for YallaMotor.com. The Bayt.com-incubated startup is out to help you find the perfect car, and according to Hassan Siddiqui, business head at YallaMotor, there’s no better place than the Middle East for this kind of business.

Launched in August, YallaMotor operates in the UAE, Saudi Arabia, and Egypt. “People are crazy about cars!” says Siddiqui. “It’s estimated that one million cars are sold in Saudi Arabia every year. Also, the population is huge – 75 percent of the population in Riyadh alone is between the ages of 18 and 35. The region is just ready for automotive entertainment, information, and guidance. We’re getting very positive vibes from the market.” [Imagine the market potential if women were allowed to drive as well.]

The site works as a bilingual crowdsourced guide for car enthusiasts looking for reviews, price comparisons, and updated prices and car industry news. “You won’t just get a couple of journalists telling you about the car you’re interested in, you’ll get crowdsourced guidance,” explains Siddiqui. “We plan to have multiple consumer reviews for every car, so you can tell which one is best for you – after all, after property, a car is one of the biggest investments a person can make. We want to help you make the right choice and make it easy and painless for you, so we have all the information under one roof.”

Siddiqui says that it’s crowdsourced guidance that will set YallaMotor apart from competitors like Drivearabia.com or Carmarket.ae because buyers will be the one running the show. “You will get actual buying prices from consumers on YallaMotor, so you’ll have a much more accurate idea of prices,” says Siddiqui. “Right now there are huge price ranges. There is no benchmark as to where the starting price begins – the dealers have their own prices, the people selling individually have their own prices. We want to establish a benchmark based on real consumer data.”

Siddiqui, previously the manager of online ad sales at Gulf News, teamed up with Bayt.com and Aatir Abdulrauf, YallaMotor’s product manager, formerly behind one of Pakistan’s largest car portal, Pakwheels.com, to run the startup. What was once a module to train software engineers on classifieds development on Bayt.com (Bayt Classifieds) was revamped and rebuilt from scratch, and renamed YallaMotor. Siddiqui says they plan to expand regionally, and to grow their online offering to include reviews of car servicing companies and a classifieds page for the buying and selling of used cars. They’re averaging 30,000 unique visitors and around 300,000 page views a month, numbers they hope to grow to 50,000 and 500,000 respectively.

During our meeting, Siddiqui receives a call from a Land Rover representative waiting for him to test drive a car. Car companies are partnering with YallaMotor, and Siddiqui says there are plenty of opportunities to monetise their business. From banner ads to educational marketing opportunities, and online advertorials to page sponsorships, the YallaMotor platform is flexible enough to include different kinds of advertising and find inventive ways to market products and services, he says. “The evolution of digital advertising has been very slow, and we’d like to accelerate that. We’re looking for innovative solutions based on results, so we’re willing to stick our neck out and do something different – we really want to work with dealerships and come up with interesting ad models.”

So what’s in it for YallaMotor users who take the time to write reviews and input updated information? Siddiqui says the site uses a gamification model, similar to the one used on TripAdvisor.com. “We want to be the TripAdvisor of cars,” he says. “The more contributions users make, the higher up their rank. Once we have the reward system in place, those users will have access to special events that we cover – they’ll be an integral part of our community, like an exclusive club. We have access to top of the line cars, so they can join the party. These people are important, because they are crazy about cars – so they provide us with real ammunition in terms of how we can improve the experience for the end user. They are real partners.”