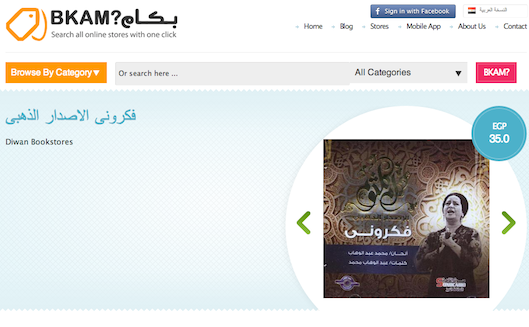 With the explosion of e-commerce websites in the past year, it was only a matter of time before someone created a price comparison website that would boost e-commerce by making online shopping even easier.

This year we've seen the rise and fall of Dokkankom, which launched as an eBay-style storefront designed to attract offline stores to come online, building a one-stop shop for various items.

Product aggregator Bkam, on the other hand, which debuted as the top free app in Egypt's Apple store for the week after its release, is focusing on a new model, offering quick price comparison with a link to the original site where the product is available.

By scanning available websites and listing their products automatically, the site has so far listed over 80 online stores in Egypt, aggregating over 250,000 products, from books to electronics to clothing.

As it locates items online, it uses an ad cluster to combine products and add them to categories. "It's hard to find an algorithm that can detect the products and link them together," says founder Mahmoud Abdel-Fattah. "E-commerce websites are not very consistent. You find stores that call items by very different names."

To develop an accurate algorithm- the central value of their business- Abdel-Fattah has worked with eSpace, the Alexandria-based software development company known for working with Akhbarak, the biggest news aggregator in Egypt, and building the official Egyptian referendum site and parliamentary and presidential election site elections2011.eg.

He initially presented the idea to them after winning the MENA 100 Business Plan competition this year. It was a logical fit; algorithm development isn't exactly foreign territory for eSpace; they've also worked with streaming platform Nextly (a Wamda Capital portfolio company). As they worked to build the platform with Abdel-Fattah, they became equity partners.

eSpace's algorithm is robust, and yet it still needs a bit of human input for the final categorization, explains Abdel-Fattah; no algorithm is perfect, especially where only one character differentiates product- as in the case of the iPhone 4 and and iPhone 4S. To improve its accuracy, Bkam is using crowdsourced workers to amend categorizations and ensure accuracy, but it hopes to one day perform the clustering entirely by machine, as the algorithm improves.

With a love of math, it seems that building Bkam as a company is almost an excuse for Abdel-Fattah to test and iterate a good clustering algorithm. But customers are taking notice, and he intends to make the platform profitable. After launching mobile apps for Android and iPhone in mid-October, Bkam has seen over 8,000 iOS app downloads, without spending a dime on advertising.

Revenue streams will begin with targeted online ads; Abdel-Fattah is also hoping that e-commerce sites that receive several referrals will also eventually want to pay for that traffic- "If a user clicks 'Buy now,' we should eventually be able to take a commission on that purchase, or small fee."

Another natural revenue stream is selling data about consumer behavior to marketing agencies. But Bkam doesn't let their creativity stop there; another possibility is "A web game like 'The Price is Right,'" says Abdel-Fattah; he's already developing the product for Unilever.

What differs wildly in Abdel-Fattah's approach, from say that of Dokkankom, is that Abdel-Fattah is not dependent on bringing a critical mass of vendors to his site. He's already solved that issue by choosing to aggregate items. And by focusing on the mathematics of the clustering, he's building a technology that could be white labeled or eventually sold as an enterprise solution.

Unlike many startups I've seen lately, Abdel-Fattah is bootstrapping using his own funding. By the end of June 2013, he intends to go after potentially more lucrative markets in Dubai and Saudi Arabia, and he'll look for investors soon.

In the coming months, he plans to expand the team and also radically expand the product so that any user with a smartphone can scan the barcode of a product to comparison shop. "This will allow our users to reveal better prices offline as well," syas Abdel-Fattah. Bkam will further facilitate the offline to online transition by allowing offline stores to upload a very basic Excel file in order to publish their products on the platform.

Ultimately, rather than compete with existing e-commerce sites, Bkam intends to boost the entire sector, says Abdel-Fattah. "Our traction demonstrates the huge potential in e-commerce for those that want to know the price of items online."