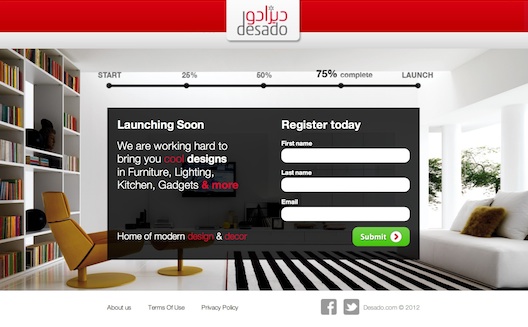 UPDATE:  Desado went live today, Monday, December 10th. Their press release states that Desado is now the "largest platform in the Middle East for people to connect with the regional and international design community."

Fab.com is killing it. Projecting US $100 million in revenues this year after launching less than a year and a half ago, the New York-based design retail site has around 5 million users, has raised a total of US $156 million in funding, is already looking to expand into Europe, has launched TV ads, and just acquired True Sparrow, the company in India that helped build its platform. (It took Gilt Groupe two years to get to 1 million users).

Fab.com co-founders Jason Goldberg and Bardford Shelhammer (who built Fab along with True Sparrow founders Deepa Shah and Nishith Shah) say the site couldn’t have been built in Silicon Valley, pointing out that “New York is a design city.” But could it have been built in Dubai?

That’s a question that Muhammad Chbib, the ex-CEO of Sukar, will be asking this year- he’s set to launch Desado, a Fab.com clone for the Middle East, by the end of 2012.

The site will use a similar model to Fab, featuring interesting and unique design, home décor, and furniture items, sourced from central Europe, Germany, France, Turkey, and the UAE. Desado aims to both bring buyers items unlike any they can find in the UAE, and feature local boutique designers in the UAE and broader Arab world that may not be well-known.

The key to success with e-commerce, and especially flash sales, is customer service, which Fab.com is known for. It’s also the edge that Chbib plans to have at Desado. At Sukar, he worked to decrease the average delivery time from over 30 days to 4 days across the entire Middle East.

The secret? Minimizing drop-ship shipments, using smart consignment. That means that Desado sells on consignment, to minimize its investment in inventory, but also insists that items be stored locally in its warehouses in the UAE before the items are posted on the site. The only items that will be potentially drop-shipped are large furniture pieces.

Social interaction is also essential. Last year Fab.com redesigned its site to integrate Facebook and created an “Inspiration Wall” to encourage users to post items that interest them. They also try to create an air of “discoverability,” something Chbib will also be working on at Desado.

Another crucial aspect in the flash sales business is content, something that Alexis Maybank of Gilt Groupe discussed in her chat with Wamda; Desado will also, no doubt, have to focus on its content in order to entice customers.

For Chbib, experience improving logistics at Sukar played a large role in his decision to start something new.

"I wanted to explore new ideas in a different context than the context of Sukar, because I see great potential in e-commerce, and I wanted to create something from scratch. I was called in to improve operations at Sukar, and I did that, and then I wanted to launch out on my own."

It could be tricky to drop-ship large items like furniture, and ensure that customers feel comfortable buying larger items online, but the time to test is now, says Chbib.

“There’s huge demand in the home décor sector in the region,” he says, reporting watching the sign-ups pop up every minute on his screen thanks to the launch of his Facebook ad campaign.

He remains convinced after working at Sukar that the e-commerce opportunity in the region continues to grow. “If you compare MENA to the US and Europe, you can see that we're in an early stage. Yet employees learn from working at big e-commerce companies in the region and become better at the next opportunity. Investors are getting better at investing in the right business models,” he says.

“What is undisputed is that there's a huge potential for e-commerce in the region. The time is now for the Middle East.

Stay tuned for a sneak peek of the interface and more when the site launches.