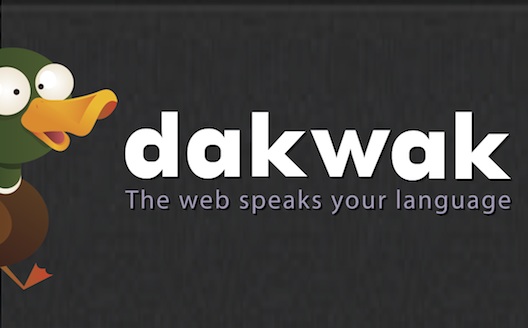 Dakwak has been in the making for over a year, but it has now finally launched its solution for helping websites localize or go global.

For small startups in the region looking to launch their website in other languages, Dakwak offers a way to initially translate their site and maintain translated versions without hiring an entire team to do so.

“There aren’t any tools out there for what we’re doing,” says founder Waheed Barghouthi, who started Dakwak after being inspired at a coding conferece for developers in Egypt to create more Arabic content online. “I started thinking that if we translate English content to Arabic, we can expand Arabic content online eventually.”

It doesn’t just localize to Arabic, however; the Oasis500-incubated startup offers website localization in 54 different languages, with three different options:

1) machine translation, via Google and Bing translate services, that can then be tweaked by the site owner

2) translation via the startup’s own internal team, that Dakwak uses to create and maintain the translated versions

3) a full translation solution that leverages a combination of APIs and professional translation agencies including Gengo.

Barghouthi and his technical partner Zaid Amireh don’t have access to the source code of a given website, but simply work to maintain updates to the site in multiple languages. The content of each version is accessible through a CMS and is indexed and visible to search engines and optimized for SEO.

Dakwak generates revenue by taking a margin on the professional translation, and charging for hosting services- all translated versions of a website are maintained on their servers so that their team can continue to update changes across site versions.

It’s crucial to make one distinction- while localization is their main product, Dakwak isn’t a translation company. They aren’t set up to provide affordable ongoing translation for a content website like, say, Wamda.

Their initial price of $0.05/word for translators with 2-3 years of experience is fairly good, but translators with more experience cost $0.10/word and those with proofreading, editing, and post-editing (which a content site requires) will run about $0.15/word, which is steep for daily needs when it comes to Arabic. Yet this would likely be hassle-free for a team that doesn’t have in-house translation and wants quick localization.

Barghouthi doesn’t see the company competing with the likes of crowdsourced translation platform Qordoba (a Wamda Capital investment), for instance: “Qordoba is a complementary service. We could integrate Qordoba's API into our system so that our professional translation gets funneled towards them.”

Getting Advice as they Grow

Thus far, since the company’s beta launch in June, they’ve built up a base of 12 clients, which vary from startups to enterprises, says Barghouthi, including Fustany.com.

They have 17 servers up and running (after all, infrastructure is a crucial element of their offering) and their team of six has written all of the algorithms themselves, to build a completely home-grown solution.

As they’ve grown, the team has received steady feedback on their product, beginning with their mentors at leading Jordanian incubator Oasis500, where they graduated in the very first wave.

Mike Cassidy of Google was one mentor who has worked with the team for over a year now, who’s known for encouraging a fast launch (which he discussed in a talk and interview at CoE in 2010). His advice includes “recommending market segmentation and focusing on one niche,” says Barghouthi, “which we did by focusing on small to medium sized websites.”

“He also advised us to test small advertisements for website translation keywords, and introduced us to some investors as well.”

When it comes to taking on global competitor Smartling, it all comes down to making things simple for local customers, says Barghouthi. “They are very focused on the U.S. market and have been focusing on direct sales to enterprises rather than common customers. Their prices are also not suitable for startups. We’re targeting the masses.”