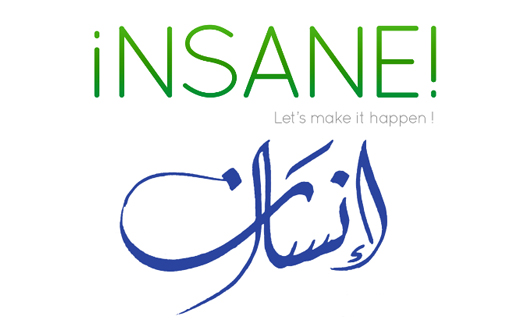 Among the locations known for hosting tech and non-tech events, you’ll find one like none other in Morocco. This place is, literally, iNSANE! (pronouned in-sahn, meaning “human being” in Arabic)- the first coworking space in Morocco and certainly one the most curious, different, and amazing venue I’ve personally checked in to on Foursquare in Casablanca!

When I first discovered iNSANE!, it was for the BeMyApp WeekEnd Morocco. I quickly became addicted to the place and wanted to know more about its brilliant founders.

Since its origins in San Francisco in 2005, the concept of coworking has quickly proven itself to be a major productivity and creativity booster for work-at-home professionals, entrepreneurs, frequent travelers or freelancers worldwide.

Inaugurated five months ago in Casablanca, iNSANE! was co-founded by four young Moroccan entrepreneurs passionate about entrepreneurship and innovation. They're three women and one man: Ibtissam El Ghinaoui Bargache, Kenza Benamour, Myriem Hashambhoy and Mehdi Bellatig. I had the amazing privilege to interview them a couple of months ago and we discussed a lot about entrepreneurship in Morocco and the great challenges of our society.

“iNSANE! إis a very open place for people to come, connect, and work, where entrepreneurship is the main thing we want to support in the Moroccan society” says Myriem.

“Entrepreneuship with a big E,” adds Ibtissam; supporting businesses was the main inspiration for creating iNSANE!. The team strongly believes that entrepreneurship is the key to social change in Morocco, as it can help fight local social taboos about class segregation or unemployment, for example. In a country where half or the population is young and suffers from unemployment, iNSANE! Is clearly positioning itself as an advocate for social entrepreneurship by promoting the idea that starting a business is an alternative to unemployment.

“We come in a time of crisis, which is actually an opportunity,” says Kenza; it’s an opportunity for people to change their job, and their way of thinking, and working thanks to coworking.

The large physical space of iNSANE! is divided into several work areas with sofas, chairs, desks- quiet rooms for thinking, brainstorming spaces, a cafeteria, and of course the biggest must-have: a wifi network. It also offers all of the other essential tools for working, thinking, discussing, and networking, including knowledgeable people who can help shape ideas. Add to that some original decoration, and you have a terrific nest for ideas and creativity. “It’s a place where entrepreneurs can find quick answers to their questions,” adds co-founder Mehdi. Those visiting Casablanca should definitely visit and check out the series of events iNSANE! is regularly hosting like recent Pitch Please! and TedX Casablanca Salon.

I personally think that iNSANE! has proven its effectiveness in Casablanca and Morocco within only a few months. It is a real and powerful catalyst for educating people, younger and older, in entrepreneurship and I strongly hope that many initiatives like iNSANE! will come to life and be encouraged in Morocco and elsewhere in the MENA region.

The big challenge now for Ibtissam, Kenza, Myriem and Mehdi is finding sponsors and investors to help them continue this amazing adventure, by providing help, expertise and funds. Indeed, the venue currently occupied by iNSANE! at Boulevard Moulay Ismaïl will actually be returned at the end of this year to its owners, so the team is actively looking for a new venue for their co-working space. I’ll end with a call for to investors interested in supporting Moroccan entrepreneurs: "Let's make it happen!”

Pictures of the iNSANE! co-working space:

[VIDEO] Watch the exclusive interview with the 4 co-founders of iNSANE!:

For more information about iNSANE! co-working space on their Facebook page and on Twitter at @insanacasa or email them at contact@insane.ma.