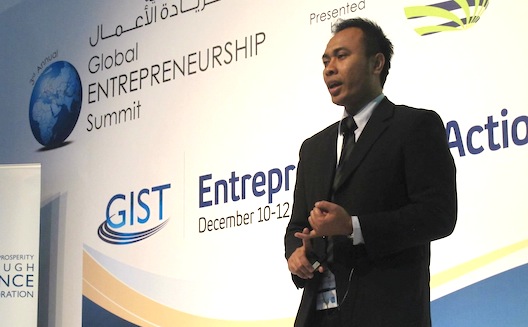 The Global Innovation through Science and Technology (GIST) Tech-I 2012 Competition came to a close yesterday at the Global Entrepreneurship Summit in Dubai, winnowing 30 semifinalists from the Middle East, Africa, and Central and Southeast Asia down to four winners and one top female entrepreneur.

After submitting two minute video pitches detailing their ideas and go-to-market strategy, these 30 entrepreneurs from the 44 countries that GIST supports workshopped their ideas over the two-day event and pitched ideas in ICT, Health, Agriculture, and Energy sectors to a panel of judges at the finals yesterday. The winners will receive support to build their technologies through GIST's wide-reaching networks and mentorship programs.

The winner, Natali Ardianto, Co-founder and COO of Tiket.com, took home $25,000 for his idea for an online travel & entertainment gateway for Indonesia that will sell flight, train, hotel, concert events and movie tickets. Hopefully the prize will help him develop the platform and peripherally support #StartupLokal, the biggest startup community in Indonesia, which he co-founded. Watch his initial two-minute video pitch here.

The runner-up, Mohamad Taha, Founder and CEO of ma2too3a!, comes from Lebanon, where he built the crowdsourced mobile application to offers real-time location-based news and traffic updates, initially offering updates on outbreaks of violence and protest. Now, the platform is diversifying to focus on a range of topics; the $15,000 prize from GIST won't hurt their expansion. Mohamad has also built software development company La Roche Soft. Watch his video pitch here.

In second place (GIST has both a runner up and a second place winner) was Egyptian entrepreneur Khaled Wagdy, who, along with his co-founder, won $10,000 for Motion Capture Systems, a tool designed to assist animators and 3D artists with character animation. Watch his video pitch here.

The top female entrepreneur awarded came from Malaysia; Jolene Sim presented Centsless, a Malaysian company that offers a gamified twist on loyalty programs, allowing users to earn points both offline and online and redeem them for rewards using their mobile phones. Jolene, who took home $5,000, develop Centsless from Mainstream Online Buzz (MOB), a social media company that she founded, which turned a profit within its first year and which was selected to represent Malaysia at the 10,000 Women Entrepreneurship Program. Watch her video pitch here.

Ahmad Al-Mubiden of Jordan won the most crowd votes for his idea, Mubstar (see more on all winners on the GIST Initiative blog). The winning entrepreneurs will get a huge boost from the large cash prizes given- hopefully they will implement wisely to grow slowly and not splash out their cash in one fell swoop.

ma2too3a! especially I would love to see grow into an application with trusted, real-time bilingual information in Lebanon that covers political events well, which is what earned it popularity in the first place. The team has confessed that they want to pivot into traffic updates for Lebanon, which could be useful; perhaps it's only those of us that have grown terribly cynical that assume the traffic jams are never-ending between certain hours. Yet any help escaping the gridlock in Beirut is also welcome.

A Note to Online Voting Platforms

Not everyone is happy with the video-focused submission process. Crowdsourced vote is a noble approach when it can be truly democratic, but, as one applicant pointed out to Wamda, "sometimes these competitions really come down to popularity contests," because applicants can simply buy votes online.

This issue is hardly exclusive to GIST, but applicant Maha Khatib, who did not attend the finals, reached out to address an issue that any online voting platform- including Wamda, when we run online competitions- has to be vigilant about. "It seemed that some of the contestants were cheating with a huge lead ahead of everyone else just one day after voting began," she recalls. As momentum gained, it was hard for her to tell how much was organic.

It's hard to tell without deeper analysis of the traffic, but CRDF Global, which supports GIST, has taken steps to minimize the effect of these factors, changing the voting procedure this year so that 30% of the selection was based on popular voting and 70% was based on expert judging. It's also critical to have final pitches done in person, as GIST does. At the end of the day, entrepreneurs' ideas and résumés speak for themselves.

One thing is for sure- GIST alumni, 6 of whom were also in attendance, have been accelerating on their successes this year. Hind Hobeika, who also won the MIT Arab Business Plan Competition this year for reinventing the swimmer's goggle with Butterfleye, was in attendance, as was Perihan Abou-Zaid of MIT Second Place Winner Qabila, an Egyptian media company that works to produce progressive multimedia narratives, and Ziad Sankari, who is steadily working on building his heart monitor, CardioDiagonstics, and has a few announcements coming soon- stay tuned for more on these GIST alumni.