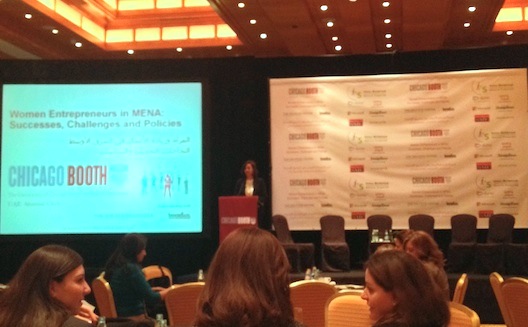 What do you get when you put an outspoken group of female entrepreneurs under one roof for one day? At the recent Women Entrepreneurs in the Middle East and North Africa event hosted by the University of Chicago Booth School of Business, in association with Strategy& at the Ideation Centre, heated discussions and differing opinions ensued, but at the end of the day, so did a common goal to boost entrepreneurship opportunities for women in the region.

Sitting on the day’s first panel was Tarek Sadi, Managing Director for Endeavor Lebanon. In his opinion, the emphasis on social structures and norms, combined with a dependency on the patriarchs of a family, are the main culprits behind the slow uptake of entrepreneurship amongst women in the Arab world. "There are a large number of women entrepreneurs in the Middle East, but most of them remain in lifestyle businesses, with no interest in scaling.”

Advocating for regulation and affirmative action, he also urged a grassroots solution. “Social change has to come from women breaking down social barriers and leveraging the NGOs and private sector support they have.”

This view was later challenged by Dr Leila Hoteit, Principal at Strategy&, in a keynote address termed the “Third Billion.” The research she presented worked to dispel many myths, the first of which is that women entrepreneurs primarily build small businesses – Strategy& found that more than 30% of women-led businesses are large scale and over 80% plan to expand.

Ambareen Musa, the Founder and CEO of Souqalmal.com, a financial and telecom services comparison site, is one such example of an entrepreneur aiming to reach a regional market. One factor that has made it easier for her to focus on her business, she revealed, is the ability for a household in the UAE to be supported by just one income, allowing wives, sisters and daughters the opportunity to take the risk of entrepreneurship.

As Ambareen also pointed out, the question of whether to found a business is also not based in ability, but in desire. Many will “get married once they reach a certain age, and stop working, which is a testament to the cultural and social aspects at play,” she pointed out.

Rama Chakaki, the co-founder of Baraka Ventures, sang a different, more optimistic, tune. “The main challenge is that we focus on challenges,” she offered, touching upon a theory which is brought up repeatedly during discussions and coffee breaks- dwelling on the negative has its own consequences. She invited us to embrace the success stories, calling upon Loulou Khazen, founder of Nabbesh.com, who recently won du’s reality TV competition The Entrepreneur. For Loulou, the challenges of being an entrepreneur were universal rather than gender-specific. She also emphasized the positive, noting that “It’s good to see women making a positive impact.”

In Saudi Arabia, however, the effect of gender is deeply felt. Tuba Terekli, cofounder and CEO of small business support organization Qotuf, likened the state of women in entrepreneurship to “a small camel progressing forward.” The resistance in KSA comes from all sides; not only are fathers, brothers and husbands less likely to encourage their daughters, sisters and wives to join the workforce, but employers are often equally conservative. “Employers generally believe that women [in KSA] have too many social commitments to be able to commit to a job – they simply didn’t want Saudi women to join them.”

After the social, cultural and political reasons were debated, Neredeh Chamlou, Senior Advisor at the World Bank, closed the discussion with a poignant thought. “Perhaps we need to call on fathers to help empower women with the self-confidence to succeed and support to enter the workforce, seeing beyond the gender limitations previously reinforced by their surroundings.”

Following the panel discussions, Tarek Sadi pointing to power of role models in a chat. Several women are leaving high paid jobs with top tier banks and consultancies to start their own businesses – including Salam Saadeh, founder of Active-M and Y+ Ventures, May Habib, co-founder of Qordoba (a Wamda portfolio company), Loulou Khazen of Nabbesh, and the women at Glambox, among others, he says. “It’s everyone's responsibility to support them in braking down the barriers women face in business in the Middle East.”

There is no black and white. The biggest mistake we can make is to generalize and group women entrepreneurs in the Middle East under one umbrella. Some continue to enjoy a first world experience in an emerging market, where, like me, the challenges they face are gender-neutral, helped in large part by a friendly environment and supportive families who have been educated abroad.

For some, the social pressure against working outside the home may influence their decision not to enter the workforce or found a venture, and some struggle in hostile environments. As we support these women, we can hopefully move past an “other half” view of women in the workforce and closer to achieving the balanced and diverse workforce most suited to a sustainable economy.