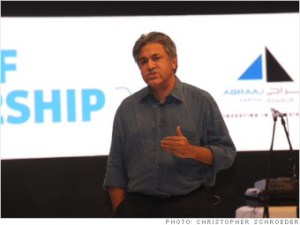 This piece was originally published on Fortune on January 28, 2013.

Those who believe linear careers are linearly predictable might think Arif Naqvi has had consistently bad timing. The Karachi-born investor studied Soviet Economic Systems and National Planning at the London School of Economics a few years before the Soviet Union collapsed. He moved from London to Saudi Arabia three days after the Iraqi invasion of Kuwait. He led and funded the Celebration of Entrepreneurship, then the largest gathering of start-up entrepreneurs in the Middle East, two months before the Arab uprisings consumed the region.

But there is nothing linear or linearly predictable in this remarkable entrepreneur except his performance. Naqvi arrived in Dubai in 1994 with a total savings of $75,000 and set to work to find investment opportunity by making contrarian bets. Over the subsequent fifteen years, his investment firm Abraaj Group effectively helped give birth to the private equity industry in the Middle East and North Africa. Today, after acquiring the London-based private equity fund Aureos Capital in the summer of 2012, Abraaj is among the largest growth market investors worldwide. It manages over $8 billion, operating out of seven hubs across 35 cities, with investments from Latin America to China, from Kazakhstan to South Africa.

It is no surprise that he has something to say about the uncertainty and opportunity in today's Middle East, and how this fits into broader trend for new markets.

"The mistake so many people looking at the world make today, especially when they consider the Middle East is that they paint it all with one brush as opposed to understanding the nuances within each of country," Naqvi told me over coffee in his New York City hotel suite last month. "The West particularly Western media doesn't seem to be able to discuss the region in any other way than as to suggest it is simply one big war zone. Events that happen in Syria should not detract from what the region can accomplish. But they do."

In fact, Naqvi believes, the problem is not so much what the West misunderstands as it is three realities it misses altogether.

The first is that the narratives of war blind the West to equally clear economic trends in the region. For over a decade, in macro terms, countries like Turkey, Egypt and Saudi Arabia have been consistently ranked in the top ten growth markets in terms of potential across almost every survey. "Even today," Naqvi notes, "These countries are expected to grow at 5% per annum over the next five years. So the next question should only be what this means in terms of the investment requirements in specific various sectors."

Consider the opportunities for the construction, retail and health care industries alone, Naqvi says. "There is demand for more than a million houses to be built in Saudi Arabia over the next three years; credit and debit card penetration is rising exponentially from a small base in the larger regional economies; hospital beds will double in the Gulf countries over the next fifteen years. One cannot understand this from afar. That's why we remain very local in the markets in which we operate."

Second, what is happening in the Middle East is part of a significant and clear shift in global economic and, to some extent political, power from West to East. Africa, where Abraaj has deployed $1.5 billion across over fifty companies, is a case in point. Seven out of ten of the world's fastest-growing countries are in Africa, Naqvi notes, and McKinsey estimates that by 2060 there will be 600 million middle class consumers on the continent. How will this affect the Middle East? "The Middle East is what connects China and India to Africa," he smiles. "It is for this reason that the region is home to one of the most profitable airlines, Emirates Airlines, and one of the largest ports in the world, Jebel Ali. As Asia and Africa continue to grow I only see a greater role for the Middle East in the global economy."

Third, the demographic shifts and desires of the new generation are unleashing an entirely new era of entrepreneurship in the Middle East. "Fifty percent of the population here is below 25 and many are currently underprivileged," he says. "This is very challenging, but at the same time virtually all have aspirations for social mobility."

Naqvi believes that what the new generation is doing with technology, and in the start-up businesses he and his team see every week, is a new expression of their taking control of their own opportunities.

For Naqvi, misunderstanding these current realities also leads to missing additional and complementary trends tailor-made for growth markets like the Middle East.

As economic strength shifts west to east, it is progressively more urban. "Every year cities are expanding in growth markets to the tune of eight New York cities," he marvels. "Twenty five cities in these markets represent more than the entire population of the U.S. This represents a potential middle class of 1.4 billion people – 1.4 billion new, relatively easy-to-reach consumers."

And business themselves will step up as consumers demand it. For Naqvi, "corporate social responsibility" is not merely a term of public relations but it's a component of any company as important as making profit. All stakeholders today and increasingly in the future traditional ones like customers, investors and employees, but also the communities where they live or touch virtually will simply demand a sense of inclusiveness and, again, innovative problem solving.

For Naqvi the man, the fundamental unknowable question for the intermediate term the fundamental choice really is whether governments and institutions will embrace these realities and trends. "Who can deny that people asserting their rights to seek a better life, participatory governance, and more accountability from governments is a good thing in the long-term?"

For Naqvi the investor, the fundamental question in the near terms is whether there will still be good investment opportunities where he can deploy more capital. "I certainly don't want to be facetious about this, but I'm more concerned that the Eurozone and the U.S. are able to put their houses in order. One can't be an island of excellence in an ocean of turbulence."

He makes it clear where his greatest optimism lies. "I am, on balance, optimistic about the Middle East's contribution to global growth increasing over the next 5-10 years. My bet is with the entrepreneurs who will make it so."