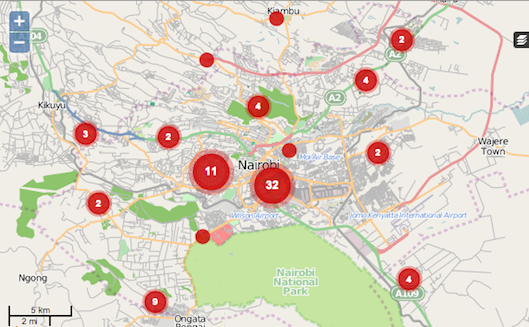 Whenever I hear people in the Arab region complain about the traffic, I tend to laugh. With the exception of Cairo, which has been bestowed the honor of the ‘loudest city in the world’ because of its truly atrocious drivers, the traffic here is nothing compared to most African cities. On a rainy afternoon in downtown Nairobi, Kenya, it can take a taxi two hours to move half a kilometer.

Why is it so bad? The answer is simple: governance.

Although Kenya’s brand new constitution sets forth a mandate for one of the best democracies in the world, without mechanisms for citizens to voice their problems and incentivize politicians to take action, it’s worth nothing more than the paper it’s printed on.

Rampant corruption, a lack of accountability, and political impunity tend to perpetuate, failing to fix issues like overflowing traffic and broken water systems.

Sometimes even democracies need a little help. Now technology is paving the way.

In Kenya, home of Africa’s m-revolution, new apps, platforms, and ways of crowdsourcing information from citizens and civil society organizations are shifting the dynamics of power, and changing the way Kenyans benefit from their government and each other.

In a recent piece titled “Kenya’s Propensity to Crowdsource,” Wilfred Mutua of Afrinnovator noted that, “Crowdsourcing essentially is not novel to the Kenyan digital scene unlike other African countries…. What we are seeing in Kenya is a lot of passive innovation in the way real-time information is being used on social media or the way in which conversations are directed.”

Where conversations were once one-way (government to citizens), technology is now allowing for multi-directional discussions that bring greater accountability and transparency.

Here are a few examples:

Kenya’s propensity towards crowdsourcing is growing, and with it will come great benefits for citizens, and more opportunities to make the little voices heard. Whether the government chooses to listen is another question.