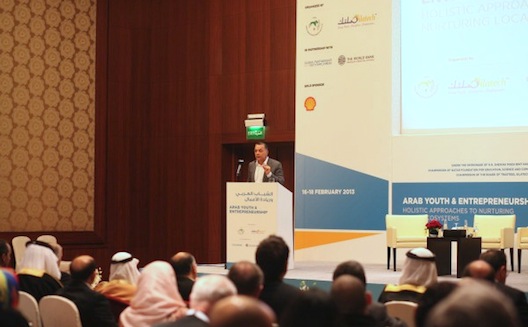 As the Arab world assesses the factors that led to the Arab uprisings and looks to a future with accelerating unemployment, it’s clear that now is the time to act to change the status quo.

The conversation about entrepreneurship as a solution for the region’s instability and economic stagnation has been building for a few years now, but now the movement is at a critical turning point. With Syria’s haunted refugees on the region’s collective doorstep, it’s not a coincidence that plans for economic transformation are being galvanized into action.

This past weekend, Silatech struck at the heart of the issue with its Arab Youth and Entrepreneurship Conference, which brought over 300 attendees together to debate the critical challenges facing young entrepreneurs, focusing on collective impact and data-driven approaches.

Fadi Ghandour, the Founder and Vice Chairman of Aramex and Ruwwad for Development, and Chairman of the Board at Wamda, set the tone for the event with a keynote address introducing the themes of the Corporate Entrepreneurship Responsibility movement.

As a comprehensive call for private sector action in support of entrepreneurship, CER is sounding a battle cry in the war for jobs. Talk and suggestions have been abundant to date; CER is a plan for action.

At the event, Fadi introduced the movement, which you can read more about in Fadi’s inaugural article on Wamda here and sign up to join here.

The central pillar of CER is that the private sector must lead efforts to support startups, as it is best positioned to contribute its knowledge, capital, and networks in order to build a sustainable entrepreneurship ecosystem. Key soundbites were tweeted by the audience on hashtag #AYE2013:

“Companies that don’t have a voice in the development of their countries will be exiled.” (@KamelAsmar)

“Entrepreneurship is not a policy, it’s a societal process… it’s about the empowerment of the citizen.” (@KamelAsmar)

The talk also focused on the idea that the region needs to reinvest in creating an effective education system that truly serves Arab youth who seek jobs and want to create companies. In 2010, 26% of youth in the Arab world were planning to open their own business in the next 12 months vs. 4% in the US, according to Silatech.

“Entrepreneurship is a skill and it is learned!" - Fadi Ghandour of @aramex speaking on the development of the education system. (@SilatechTweets)

“We have to create an educational system that caters to creating entrepreneurs.” (@KamelAsmar)

“Redefining learning, not just in schools, but online, on the job through internships.” (@ReemKhouri)

Fadi also criticized protectionism, pointing out that the private sector needs to take an active role in advocating for open markets.

"Entrepreneurs need to scale up and open up markets" - Fadi (@SilatechTweets)

Another central aspect of CER involves supporting microventures with microfinance, especially those founded by women. In Jordan, around 270,000 active loans totalling over US $140 million has been lent to around 244,000 borrowers, 82% of whom are women, who maintain a staggering 98% payback rate. Thus far, the resulting ventures employ more than 2000 people.

SilatechTweets illustrated that there were “Claps from the audience as @fadig says 'It's clear that women DO stick to their word' when speaking on credit repayment.”

Khalid Alkhudair summarized the tone of the speech as he tweeted: “Entrepreneurs don't care about what I'm saying now, because by definition they will go and do!”

For more on the CER movement, again see here.

As speakers built upon the themes of CER throughout the event, one panel on the second day, Leading Social Change through Entrepreneurship and Technological Innovation, garnered buzz as a group of dynamic entrepreneurs demonstrated their abilities to make lasting change.

A few basic facts revealed the opportunities at hand:

Ahmed Zahran from Karmsolar: "Egypt does not realize the potential of the desert for energy and sticks to the Nile." (@Ncorbel)

“Karmsolar vision: Egyptians will live in 25% of their land (vs. 8% now) Hope for #CairoTraffic" (Ncorbel)

“Cedar Environmental recycled over 146k of plastic bags to produce furnitures and other goods.” (@Ncorbel)

In the afternoon, speakers from Kiva, Souktel, Pro-Invest, and the Youth Employment Network discussed opportunities in investment and mobile networks. Kiva has thus far moved $2.8 million from lenders to borrowers, @SilatechTweets noted. Chamseddine Ouerdiane asserted that IT, and specifically mobile portals, will critically influence the post-revolution atmosphere in Tunisia.

With mobile penetration across the Middle East reaching 103%, one of the highest penetration rates across the world, mobile will be a central medium for creating new jobs and connecting communities to jobs in the decades to come.