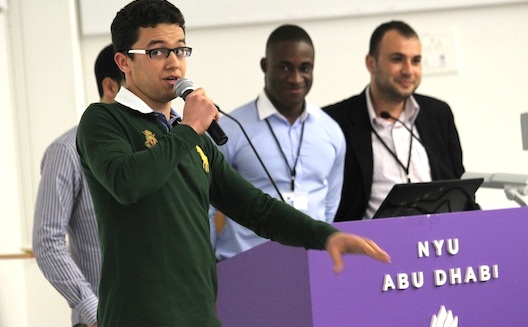 Eighty students were coached by 30 mentors during the program (academics and professionals from Google, Microsoft, NASA, among others), which culminated in an evening pitch to the panel of twenty judges.

The winning team, Take Flight, offered a video chatting platform mediated by a translator. The group’s lead emcee Seth Thompson, a Yale graduate, spoke with the practiced patter of a TED Talk lecturer, understanding that presentation is half the battle for creative enterprise.

In second place, Safe Journey designed a system of text message alerts to monitor the user’s progress along a route, functioning like an avalanche beacon in case of emergency. (For more on the 16 teams that competed, see Shaimaa Nazer's summary of the event).

Odeh’s enthusiasm for the UAE-based Safe Journey team bubbled over.  “They found a bug in Google Android,” she said.  And their app, should the many moving pieces come together, will contribute one ingredient to social improvement.

The program’s initiative towards Social Good was twofold: first, to address pressing public issues, and second, to unite and support young communities of Arab and Western programmers.

“When I came here, we were all in Lost Land, not doing anything,” said Odeh, who began organizing the first Hackathon two years ago with almost manic intensity.  And the cultural divide between the expatriate community and the Middle East, she found, was wider than she had expected.

Odeh feels that her job, energy permitting, is to foster connections and encourage young programmers to follow through. Access to mentorship and the principles of ask-for-what-you-want entrepreneurship are stronger in the United States than they are yet in the Arab World, she says. “[Students] here typically don’t have the experience [of self-promotion], but if we build this culture that’s what will happen.”

The first step for entrepreneurs is a commitment to the product, says Odeh. These students are already eloquent in lines of Python, Java, HTML5 — the Hackathon’s goal is getting their apps to have the greatest effect. “What is so beautiful about this is that people are driven by the product itself,” she says.

It remains to be seen how many of the sixteen international teams will follow through with their creations. Although the winning teams from 2011 no longer have an online presence, Taher Zanouda, a former participant from Algeria, went on to win third prize at the Azure Challenge (part of Microsoft’s ImagineCup).  Zanouda returned this year and joined the Laha team, who presented an online platform for Arab women to cope with the experience of chronic diseases.

For those committed beyond the perfection of their apps alone, the hope is that they will provide open source content to the global community of “hackers,” or find a route to monetize.  The event was not focused merely on the precedents set by Twitter, Facebook or Google, which addressed revenue only years after building a global userbase.

But with the Hackathon’s focus on providing mentorship, Odeh expects this newly connected community of young programmers will take flight, transitioning from student to social entrepreneur for good.