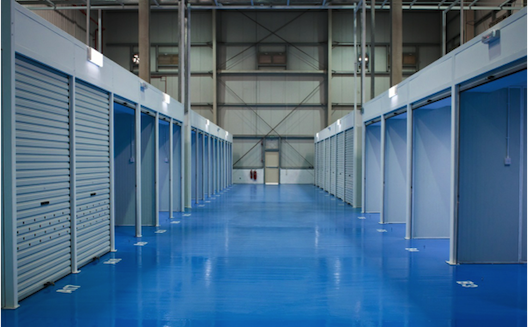 These three friends never imagined that they would open A2D, Bahrain’s first self-storage facility, as all-female partners. Yet with true entrepreneurial prowess, Dalal Bucheery, Doa'a Essa Abdul Wahab, and Alia Murad saw a market need that hadn’t yet been filled.

The three close friends—who had previously worked together, and respectively have backgrounds in accounting, business management & marketing, and quality systems auditing —faced difficulties trying to find a place to store their own things.

“We are all married with children,” Dalal tells me. “And we find that things accumulate in a matter of months! In fact, throughout their life, people amass an amazing quantity of objects. The problem arises when they don’t have enough space in their home but at the same time, they are reluctant to part with items. “

When the partners couldn't find a space to meet their own needs, they conducted a feasibility study and made field visits to self-storage facilities in Dubai.

“We saw that the Dubai market was very mature with a lot of demand, so we conducted research in Bahrain and found that this was a promising business as self-storage was still a very nascent market,” Alia explains.

“We weren’t interested in repeating businesses that were common,” she adds.

Focusing on Convenience and Security

Using personal savings of BD 80,000 (approximately US $212,000) and financing from the Bahrain Development Bank (BDB), the women launched A2D in December 2010 as the first space in Bahrain to serve the community's residential and commercial storage and moving needs. Their customer demographic ranges from individuals looking to store their household items to commercial customers warehousing merchandise or storing records and documents for safe-keeping.

Unlike other self-storage facilities, which subsequently opened in very remote or industrial locations, A2D opened in A’ali, a residential area close to the school district. Located near a major highway, the facility is conveniently accessible from many other places in Bahrain as well as Saudi Arabia, and provides 24-hour access.

Among the challenges A2D faced was the cultural adoption of a new concept; initially, most of their customers were expats who were more familiar with self-storage. However, A2D quickly began spreading awareness and educating the local market through brochures, meetings with prominent cross-sector organizations, and going on popular local TV shows like Hala Bahrain. One challenge they actually did not face is the social stigma of women running a conventionally male business.

Doa’a, who also runs a restaurant, Salad Boutique, says that despite the novelty of having women in this particular line of business, the founders’ family and friends were extremely supportive.

“People are always amazed when they visit our facility and can’t believe it was completely built by three ladies!”

Doa’a, Alia and Dalal took an empty 1150 square metre space and remodelled and constructed 44 individual units ranging in size (66, 100, and 130 sq. feet)—each featuring adjustable and portable partitions so customers can expand or contract the space as required.

“Customers want a secure location so we have installed CCT security cameras. Each unit has its own safety measures, including a fire extinguisher and water sprinkler, and the entire facility is insured. We also offer insurance for individual units for customers who want to store valuable things,” Doa’a explains.

As part of being green and reducing costs, A2D has an energy saving system, and uses special sandwich panels imported from Dubai that provide temperature control and insulation.

A2D is already reviewing growth and expansion plans, and has met with several major storage companies in the region to explore collaborations.

I ask what they’re looking for in a potential partnership, and they tell me “A good investor who believes in our concept, and who believes in us as ladies to run and manage the business.”