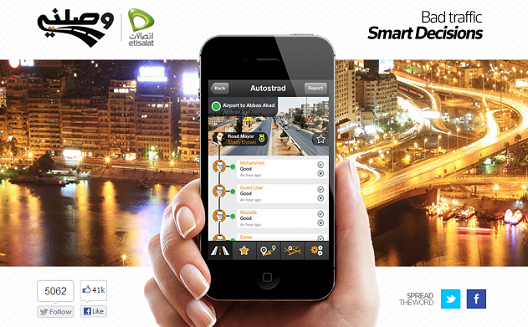 Amidst a wave of transportation apps being developed across Cairo, startup Wasalny has worked hard to differentiate itself through some very unique and intuitive features. I must admit, this is one beautiful app.

Founder Samer ElBaghdady came up with the idea for the app, whose name means “get me to my destination," in 2009, hoping to tackle the infamous problem of Cairo’s traffic. While the app first launched in October 2010, it relaunched in December, after two years of further development and customer feedback.

The new version is well organized, featuring a  photo taken by th Wasalny team of 10 for each road featured on the app's main roads list. When a user first opens Wasalny, there is a detailed tutorial of how to use the app with easy English functionality. The app is being released in Arabic this week as well.

With its sleek relaunch, the app’s number of users nearly doubled, and the new Arabic release will only push them further. Although their focus has been primarily in Cairo, Wasalny operates in Alexandria as well, and the team continues to increase their popularity there.

One of the most interesting and useful functions of the app is automatic crowdsourcing of traffic data through a mobile phone's GPS module. If users enable this feature on their smartphone, the app automatically detects which road they are on, how fast they are going and anonymously groups this data to give other Wasalny users real-time traffic information for each road. I asked ElBaghdady if their algorithm is able to take into account pedestrians walking along a road who may have Wasalny enabled. He assured me that their algorithm takes several user speeds on each road into account before reporting on a road’s traffic details.

To make the app as user friendly and helpful as possible, Wasalny encourages users to take photos of the traffic they are sitting in to post to Wasalny for other users to get an idea of what’s ahead. Wasalny users can also like or dislike photos and reports by others, which have first been screened by the Wasalny team.

Further differentiating themselves from Egyptian competition such as Bey2ollak, another community-based traffic information service in Cairo and Alexandria, and potential market entrants such as Lebanon's Ma2too3a!, Wasalny offers users a heat map of Cairo’s roads showing the congested and clear areas in color shades from red to green. The app even offers a recommended path to reach your destination with less traffic. 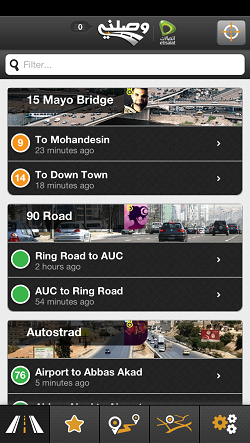 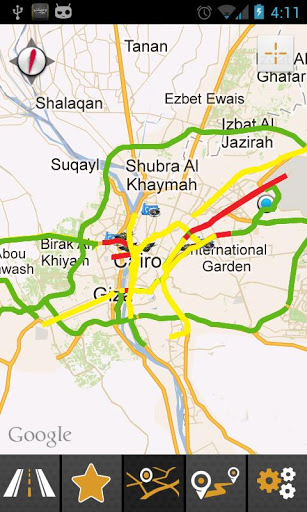 Currently, the startup is sustained by partnerships with companies like Social Fruits and Etisalat. While Social Fruits assists with development, Etisalat in Egypt makes the app available to non-smartphone users, offering them the ability to dial *11# to receive traffic information via an automated menu. Once a caller chooses a road, Etisalat texts them the traffic information for the fee of the text.

This shared revenue may not sustain Wasalny in the long run however; ElBaghdady explains that once they reach a certain threshold of users, they may start including ads on the platform to get some more steady revenue. “We don’t want to compromise the user experience and litter the app with ads,” says ElBaghdady, “We’re still cautious about it and want the ads we get to fit seamlessly in the UX of the app.” Most developers express a similar sentiment, but so far they’ve been able to sustain themselves through partnership and self-funding to continue development.

ElBaghdady offers a piece of advice for aspiring entrepreneurs: “Do not give up at all. If you think too much about the details of the startup, you might get de-motivated to actually do something. Don’t wait and think about it, just do it.”

Moving forward, Wasalny plans to solidify their coverage of Alexandria and eventually begin developing a similar platform for cities across the region. As long as they are able to find a way to effectively monetize and scale, Wasalny’s clean design and simple functionality has the potential to attract users from across the Arab world.

“It’s a long journey, and it’s a fulfilling one. When you actually see people providing positive feedback and say that they are benefitting from your work, there is no feeling like it,” says ElBaghdady.

Update: Wasalny is also similar to mobile app Taree2y, both offer English and Arabic, automatic speed detection, and a traffic heat map for Cairo. Wasalny 1.0 was released first in 2009, but their 2.0 update and release of Arabic only took place this year, showing a similar tutorial to Taree2y.  While Taree2y has a similar GPS functionality, its registration requirement at first download is cumbersome. Wasalny offers a rerouting feature, map pinpoints showing user road pictures in real time, and personal travel statistics, which Taree2y hasn’t yet released. Wasalny is available in Alexandria as well.