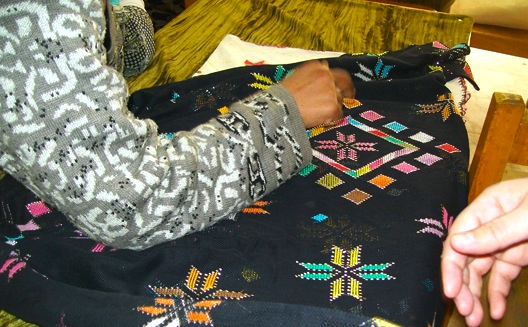 Year-old initiative Anamel Masriya hopes to transform modest Egyptian artisans into independent entrepreneurs, in a bid to boost their opportunities, and scale employment in Egypt.

Anamel, a classical Arabic word that means finger tips (Masriya means “Egyptian”), was launched by AWTAD, the Association for Women's Total Advancement & Development, in early 2012, to train micro producers and handcrafters to improve their products and reach new markets.

“I believe that micro-businesses are the ones that are going to pick up our economy, although they have been ignored completely so far,” says Shereen Allam, founder of AWTAD Egypt, who was recently elected as the President of the MENA Businesswomen Network. If business models are developed properly, microbusinesses are the fastest scalable businesses on the ground, she says.

The program links producers with young designers, who are incubated in a design hub, and marketers, who are also incubated within a marketing hub.

Funded by Mobinil, a leading telecommunications company in Egypt, it launched the pilot stage 8 months ago, incubating 25 artisans, 5 designers, and 2 marketers; now’s it’s focusing on scaling.  “What the artisans are producing is a production line that can be safe and sound [at its current level], but we need to grow new verticals,” says Allam. Currently, the team is working on developing a bigger hub to incubate more designers and marketers.

Despite the fact that gaining the trust of handcrafters in Egypt is not an easy mission, the team manages to reach out to a wide swath of artisans through announcements, word of mouth marketing, and through field officers on the ground.

The training takes a very organic approach, such that it takes several rounds for the handcrafters to be independent, says Allam: “They learn by practice; there aren’t direct training sessions.” When producers feel ready to generate new ideas and venture into new markets, they graduate from the program.

One challenge has been encouraging designers and marketers to put aside the drive for immediate profits, while creating longer term opportunities for people to sell products. Government, despite Egypt’s current transition, has in fact, not been a challenge, however, says Allam, as microbusinesses are currently beneath their radar.

The program stands out from similar programs and initiatives that mostly focus on training producers to become designers and marketers in one. The hope is that bringing these groups together will create tangible economic growth in the sector. Ans she looks to the future, Allam also hopes that this model can be replicated in other sectors and markets; perhaps others could franchise it to work with small factories throughout Egypt.

Generally, entrepreneurs in all sectors should focus more on trying something new, Allam believes. “There is always a fear of failure. While when you believe in something, though, you don’t focus on failure- you focus on making it work.”