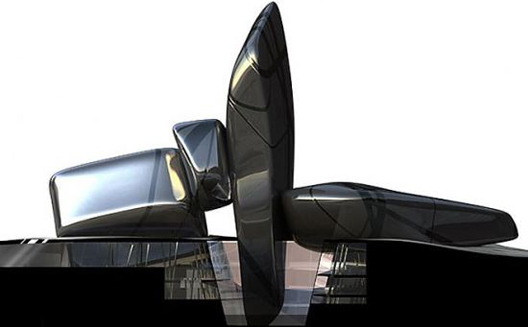 Within the barren hills of oil-rich Dhahran in the Eastern province of Saudi Arabia, a unique structure is slowly reaching high into the desert sky.

The King Abdulaziz Center for World Culture is a multi-purpose complex that aims to foster creativity, inspire innovation, and promote cross-cultural education in the kingdom. The center, a Saudi Aramco initiative, is one of the largest corporate social-responsibility projects in the region and is expected to open in 2014.

Designed in the shape of larger-than-life pebbles piled up randomly together, the architectural concept behind the center is meant to be a metaphor for the geological rocks from which petroleum energy is produced, yet each rock will instead house an important knowledge or cultural facility- a grand theatre, world-class library or exhibition hall.

One of these rocks, however, will house a mission that is more ambitious than the others. The Keystone, named after its location within the center, is an idea translation lab that aims to inspire and train young Saudis to develop innovative and creative solutions for everyday problems.

While the physical center is still under construction, The Keystone is currently running annual project-based programs, where participants work in collaborative teams to develop innovative and unique products that are later showcased at international events and commercialized with the help of the center.

Young Saudi men and women will be invited to apply for 10-20 spots in each year’s rigorous daily program, in which they will be trained on various topics related to launching a business, including business model creation, logo design, and the art of the pitch, while learning from experienced speakers such as patent lawyers and software developers.

For the program’s first main round in 2012, Keystone partnered with David Edward’s ArtScience Labs, a Harvard-affiliated idea translation lab, to train teams working under the theme of “Virtual Worlds.”

Twenty young Saudi men and women were selected and began the program in August 2012. By November, they had formed four groups, with projects ranging from a public-speaking practice program (StandingO) to a virtual game that aims to teach youngsters about entrepreneurship (LiveIt).

What It Means for Saudi

The significance of the Keystone program within the Saudi context is not to be underestimated. Within the country’s borders, an idea-translation program backed by a corporate giant such as Saudi Aramco is a novel and commendable concept. With more than 8 million Saudi boys and girls under the age of 14 throughout the kingdom, almost a third of the total population, the need for knowledge and training programs cannot be overstated, especially when traditional alternatives are not adopting new technologies quickly.

The rising number of young adults that hope to pursue a path of entrepreneurship and self-determination critically need these programs to learn how to establish a business successfully; after all, an idea is worthless without the tools and skills to enact it.

According to Youngjin Kim, the chief idea-translator in the Keystone program, “Keystone is about catalyzing innovative collaboration and nurturing creative ecosystems, for the growth of the creative economy in the Kingdom.” After viewing creativity and talent in the 2012 class, he adds, “I am confident to say that this program has kick-started the culture of innovation in the Kingdom, and inspired entrepreneurship in Saudi Arabia.”

Saudi Arabia is, demographically, a country of youth, and with such progressive social initiatives as the Keystone program, the future of innovation and entrepreneurship in the country could be truly exhilarating.

For its third iteration in 2013, the Keystone program will focus on a “synthetic biology” theme. For more information visit: http://keystone.kingabdulazizcenter.com/index.html