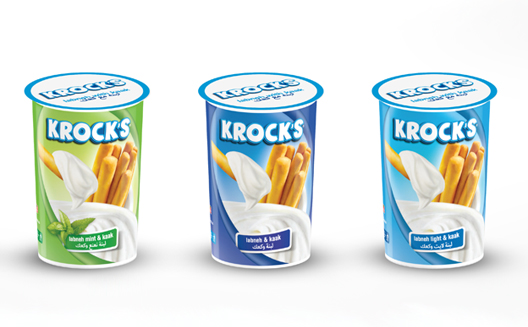 Day after day, Ramzi Jalbout and his colleagues would gather during their lunch break at St. Georges Hospital in Beirut. Usually 9-to-5ers vary their daily lunch choices, but one of his work friends would bring a half-liter tub of labneh, along with a big bag of ka’ak from Wooden Bakery with such regularity that she became known for it. For years Jalbout bemusedly watched her drag enough food out of her lunch bag to feed all of them, bring the rest home, bring it to work again the next day, and so on.

But one day in 2006, something finally clicked. The seed for Krock’s, dormant for years, finally sprouted.

Since then, Jalbout’s big idea – single-serving locally-made labneh with enough crispy ka’ak to eat it with, served side-by-side in a plastic container he designed himself and has since patented – has spread to Spinney’s, TSC, Aoun Charcuteries, Medco gas stations, and a number of Lebanese school and university cafeterias.

Called ‘Krock’s’ because of the crunch of the ka’ak, and after the French ‘croquette’, major Lebanese media outlets have profiled his product, and Jalbout, at the tender age of 30, was named one of the top 20 Lebanese entrepreneurs of 2012 by Executive Magazine.

The way Jalbout describes it, over a coffee at a suburban Starbucks, getting the company off the ground hasn’t been easy. The startup faced several obstacles early on, including a major problem with distribution, and what Jalbout describes as a “bad decision” to outsource production of the container to China. The shoddy packaging led to a major sales hiatus in 2012, as Jalbout and his partners took time out to revamp it.

Sourcing wasn’t simple either. When Jalbout began going after big-name labneh and ka’ak producers, at first, he says “Liban Lait didn’t even want to sell to us.” It took several meetings, tests, and a fair amount of charm, to finally win over Big Labneh.

After securing investment from Bader's Lebanese Business Angels, Jalbout was able to take out two 200 million LL loans from Bank Audi, the most recent of which he expects to repay within six years. The money cushion, Jalbout reports, made it easier to weather the early missteps he made with production and distribution.

Yet despite the investors, the positive press, the deals he has cut with big-name Lebanese grocery stores, and a 30% growth rate over the past two years, Krock’s has yet to turn a profit.

Jalbout attributes this not only to the Chinese container hiccup, but to a general lack of public awareness of his brand. While Krock’s plastic containers are now produced under strict supervision in Lebanon, what remains now is to get the word out about his product through planned marketing. The company has yet to launch a website, Facebook page, or Twitter channel.

To help pay off his debt to Bank Audi, and perhaps eventually quit his day job, Jalbout and his backers (some of whom are personal friends and family) are also turning their gaze outwards.

While he has the Turkish and North American markets in his sights, Jalbout is focusing first on Lebanese expats and their families in the Gulf who yearn for a taste of home for export.

Part of his measured success in Lebanon, he insists, is the freshness of his labneh, delivered daily by Liban Lait and flavored in his own patented labneh mixers (the current flavors available are olive, mint, and plain, but Jalbout plans to introduce new flavors every six months as part of a marketing scheme).

The long shelf-life of ka’ak means that it can be imported from Lebanon to the Gulf, but the labneh in each new market will have to be made in-country. This level of quality control will incur significant expenses, but it seems Jalbout is willing to make that sacrifice for the best possible product. And he thinks that his customers will be willing to pay for the convenience.

While Lebanese cuisine without labneh is almost inconceivable, it remains to be seen whether the product will catch on in the same way among consumers in the Emirates and Kuwait, where the company plans to expand next. Yet it's well-known that the Gulf loves a good Lebanese meal; perhaps they'll learn to love labneh too.