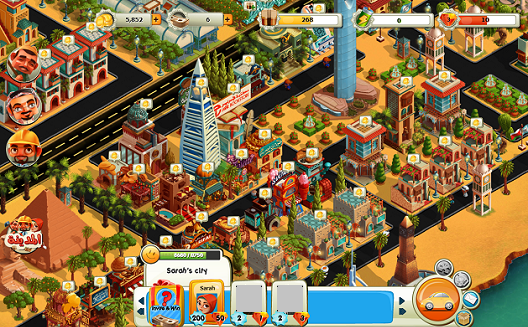 Get ready, Zynga addicts- the Arab world is getting its own FarmVille. But this time, it's coming from a local player. Nezal Entertainment, one of Egypt's leading developers, has launched their second title, Elmadinah, just this month, to offer a social game with a unique Arabic flair and a very smart monetization strategy.

It's a leap forward for Nezal, into a more regional gaming market after their first Egypt-specific game “Crowds" focused on the Egyptian revolution.

After a round of funding from Ideavelopers and Tamkeen Capital last year, the company has pivoted to focus on what's hot right now in social multiplayer games.

The gameplay is exactly what you'd expect from a typical city-building or farming game. Players are given a plot of land to build businesses, farms, houses, services, and familiar landmarks. In-game currency incudes coins, dirham, goods and energy which can be increased through in-app purchases. Players are guided with quests from main characters, and can easily travel to friends' cities.

But games in this sector were even hotter two years ago. Now, Nezal's game, available in both English and Arabic, will have to work to differentiate itself from CityVille and recently released Desert Tycoon.

It does add a social dimension that CityVille and FarmVille don't have: users can even harvest and gather resources for their friends and receive an “energy” reward for helping them out. Yet the game essentially puts an Arab sheen on a global classic.

When I met with the company's product manager, Rawiah Abdallah, in a Cairo coffee shop, she insisted that their strategy is “not about localizing existing games, it’s about innovation.”

Here's what they'll be doing to make the game go viral.

The startup will offer a freemium, in-game purchase model that is standard in similar social games, allowing players to buy virtual currency to improve their city and keep their people happy.

But interestingly, they also plan to incorporate local in-game branding.

Global, regional, and local brands will be sold slots as building advertisements inside the game, a sort of virtual billboard that is seen by both the virtual citizens of each city, and the player and their visiting friends as well.

The team still has some kinks to iron out, but the plan is to customize the in-game brands for each country; for example, while players globally may see Pepsi, Lebanese users could see Byblos Bank and users in Egypt may see the Arab-African Bank (these are just examples, not real partnerships). 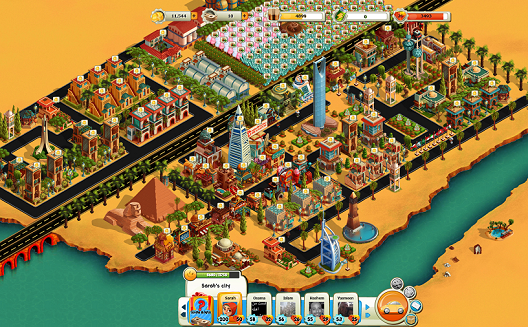 Although they are based in Alexandria, Nezal is targeting Saudi Arabian gamers first.

The Saudi market “plays a lot and spends a lot," Abdullah explains, so they hope to capitalize on in-app purchases. Once they can establish a foothold there, they hope to propel into Egypt and future markets.

Nezal is also aggressively recruiting sponsors in Egypt so that when they begin the push there, the game will already be filled with Egyptian brands for players to build within their virtual city.

Localization is a big part of the appeal. “The concept is adapted to fit the players,” says Abdallah. Nezal also hopes to adjust character accents to each locale, making players feel like they are playing a uniquely Egyptian, Jordanian or Saudi game when they log in.

Can it Continue to Innovate?

Localization is certainly important, but it remains to be seen if reinventing the wheel for Arabic users will cut it in an increasingly competitive gaming industry.

Users do tend to like simple games that they already understand, so perhaps local players will take to the regional feel. Nezal has a large and capable team of 25 to keep developing new elements in the game (a key recommendation of Zynga's Richard Rabbat), and, if they go mobile, they could also further reach users in Saudi Arabia, where 62-63% of the population has a smartphone.

Yet we'll have to wait and see if consumers truly prefer a locally-made game over already-successful similar global titles. I certainly hope so, and this will be a very good test of market appetite. But for future games, I would like to see something a bit more original and out of the box that can truly capture international attention.