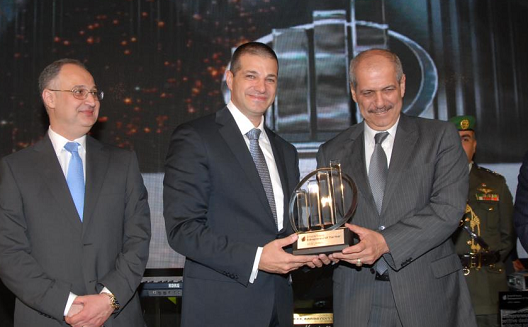 “I joined Oasis500 as a board member last year because I believe it’s time to give back and success is contagious,” says Akram Khreis, who recently won the Ernst & Young Entrepreneur of the Year Award in Jordan for his work building training programs in Jordan and founding several companies, including International Beverage Consultancy Company (IBC), which assists bottling companies with their training and management systems.

Khreis is now also nominated for the E&Y World Entrepreneur of the Year award, which will be announced in June. But getting there wasn’t simple; Khreis put in years of hard work, building his own companies, leading others, and ultimately creating a powerful new program to train 50 Jordanian engineers every year and finding them job placements.

Here are 10 tips that entrepreneurs could learn from his journey:

1. Nothing makes up for hard work. Born in Germany, Khreis moved to the U.S. in 1988 just before a currency crisis hit Jordan. When it hit, his family back in Jordan were unable to send him any monthly support, and he had to get his first job at UPS, emptying boxes. This initial job allowed him to support himself and earn up enough in savings to move back to Germany, where he got his start building a new skill set at BMW. Without the willingness to start at the bottom, he wouldn't have been able to build up his career.

2. Treat your work as if you have a personal stake in it. After leaving Germany and heading back to Jordan, Khreis took a quality control job at Pepsi and was quickly promoted to operations manager. After leading the plant through a tough year in Jordan, Khreis was then promoted to Operations Director of the Middle East and North Africa for Pepsi Cola International. “I took any job I did personally; I always made a decision based on what would I do personally, not just as an employee,” he says.

3. Find your niche. Khreis later decided to leave Pepsi and start Originalchem Group (OCG), alongside his partner with only 5,000 JD. They identified a niche chemical market and quickly made a huge profit, later expanding to take over a textile plant that ran at a high profit margin for two years.

4. Know when to walk away. When Khreis and his partner felt that they had reached the limit of their market at the textile plant, they sold the company at four times their original investment. After a careful analysis of the market, they felt that the timing was right and, as luck would have it, that niche textile industry collapsed in Jordan just a few months later.

5. Don’t go it alone. After selling his company, Khreis partnered with a German bottling company in 2007 to found IBC. Not only did he advise other companies on training, he also began aggressively training Jordanian engineers to build IBC and the ecosystem. “You can’t do it alone. I invest a lot of time in finding superstars,” says Khreis. After forming a clear vision, Khreis hires and trains individuals who ultimately can help him build that vision.

6. Reinvest in the local community. Khreis insisted on basing his operations in Jordan, despite some of his partner’s reservations. But he didn’t stop there; he launched a German-funded program to train Jordanian engineers in industry skills. He has even helped several to travel and train in Germany. IBC, which began as a team of 10, has grown to 116 employees. Today, the company spends 50,000-80,000 Euros on average to train each engineer, and runs over 150 projects in 38 countries around the world.

7. Include your employees in decision-making. IBC's success hasn't been without bumps in the road. When the recession hit in 2009, some serious decision-making had to be made. While everyone around him fired employees or cut salaries, Khreis didn’t think this was acceptable. He brought his whole team together and made it a company, rather than an individual, problem. Together they found ways to cut costs and even added a couple team members to improve efficiency.

8. Write down your goals. Khreis advises entrepreneurs to not just think up ideas, but to write them down. This turns ideas from imagination to reality, allowing entrepreneurs to visualize the possibilities and test the idea's viability. Fulfilling his longtime goal, Khreis has pledged to train and hire 50 new employees every year through his training program in Jordan, which is planned to open in 2 months.

9. Don't be afraid to take calculated risks. Khreis says that his entire journey would not have been possible without taking a few calculated risks. He learned from his past experiences and worked to find the right moments to break out of his comfort zone and innovate.

10. Ask for outside help. A last bit of advice that Khreis offers for entrepreneurs is to reach out within their industry to find possible mentors and partners. Networking is a key part of business, but don’t be afraid to go after those who may seem out of reach, he says; many people are actually willing to give their time for free to help others.

As a bonus, though he didn’t actually mention this, Khreis's example also illustrates the value of humility.

While he has become quite successful in his niche, he credits those around him with his success, recognizing that he couldn’t have done it alone and that unfortunately people often overestimate themselves and underestimate their situation. There’s a time to start up, a time to put in the hard work, a time to scale, and a time to sell. Another conclusion from his story is that not every project should last forever; learn what you can while working on it, and don't be afraid to move on.