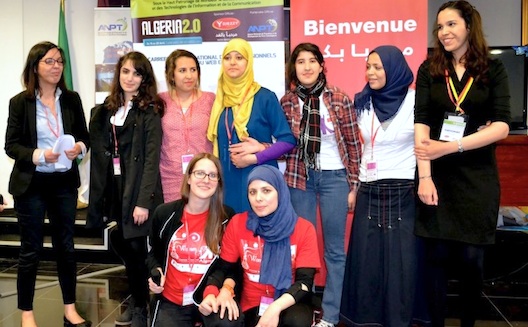 The latest in Startup Weekend's new women-focused events, Startup Weekend Algeria was the first event of its kind to feature a 54-hour weekend intensive composed only of women.

This time, however, local organizer Nassima Berrayah wanted the 55 women who attended to get comfortable over the first three days, so that they would feel absolutely comfortable pitching their ideas to strangers on the final day, which was open to the public.

True to the style of all Startup Weekends, the three-day event began at Cyberparc of Sidi Abdallah in Rahmania with an icebreaker and then a “pitchfire,” in which 24 ideas were pitched and 10 projects were formed. Topics ranged from e-commerce for antiques to e-learning platforms, babysitting websites to car repair business, says Desmazières.

Throughout the weekend, “working with other women judges and coaches boosted their confidence,” says Berrayah. “Many of the women arrived not being sure of their ability to build a technology product, but by the end, we helped them understand how far they could go.”

“They felt really confident and able to go out of their comfort zones,” says Desmazières. “Many girls removed their hijab because they were only with women, and the first night, they spent a sleepness night together, building their projects. I think everyone left the event with 54 other friends,” she illustrates.

Second place: Teach me: a virtual platform for connecting students and teachers.

While Startup Weekend’s motto is that it’s about creating entrepreneurs, not startups necessarily, this Startup Weekend was about creating startups, insists Berrayah. All of the winning teams have contacted her since the event to sign up for the incubation they won from Cyberparc and take their business to the next level, she says. Companies incubated at Cyberpark can stay for six to 30 months.

It’s not just that. One mother called Berrayah to explain how Startup Weekend changed her daughter for the better, she recalls. “She used to be shy, and now she’s become much more outgoing.”