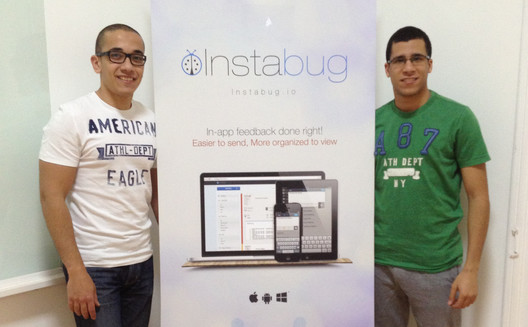 Ask most users what they hate most in any kind of app, and the answer is usually “bugs”.  But as even the best developers in the world still write code that contains bugs, bug-reporting is a fundamental part of the development process.  Cairo-based startup InstaBug has just made bug-reporting in apps as simple as can be.

We chatted with the founders, Moataz Soliman and Omar Gabr, in September when they first started off as AStarApps in Cairo incubator Flat6Labs.  Since graduation, they’ve changed more than just the product’s name.  “The old name was too confusing for people,” Moataz explains, “and we also listened to the feedback and simplified some things while expanding on others.”

The core user interface is the same and still effectively simple. Users simply shake the device to send a bug report. This is key because it doesn’t interrupt the user experience. Users then annotate a screenshot of the app, by circling, scribbling, or highlighting around relevant information, before visual feedback is sent to the developers; as they say, a picture is worth a thousand words.

Integrating the bug reporting feature into the app is even simpler than before; a developer only has to add one line of code. The whole process takes about 60 seconds. Another new feature is that a bug report sent to the developer now contains more debugging and trace information a developer may need.

The business model is also more simple than before, with a free mode for startups, and a paid mode for enterprises. The paid option allows for customization of the look and feel of the reporting page. This lets software companies with live apps add bug reporting functionality into their already released apps, while retaining their branding. It's a smart addition, opening up a much bigger market, and making the app more useful to developers who now only need one version of their app (instead of a separate testable one).

InstaBug is now live, with dozens of developers using the technology, most are local but there are also a handful of international clients as well. Their initial marketing strategy, at least until they get another round of funding, is also rather simple. They’re targeting the accelerator network they’re part of, and global hacker and developer community websites.

Android and iOS versions are now available, with a Windows 8 phone version to be released by the end of April. They’re also integrating their software to work with other bug management tools.

What’s nice about InstaBug is that it solves a real life problem for developers, in a way that is simple and efficient. But they do face some obstacles.

“The challenges we're facing are mainly related to go-to-market strategy and funding,” says Soliman. “We're facing challenges reaching out to developers worldwide.” But he also notes that despite the challenge of getting their name out there, "we have people who don't know us sending us emails and telling us that the service is really solving a huge pain they were facing. It's this feedback that makes us continue on what we're doing."

Instabug seems to have a solid service with global appeal, it's just a matter of getting their name through niche mobile developer channels and creating some major success stories to really take off.

For those interested, the founders have included a promo code for Wamda’s readers: “wamda250”.