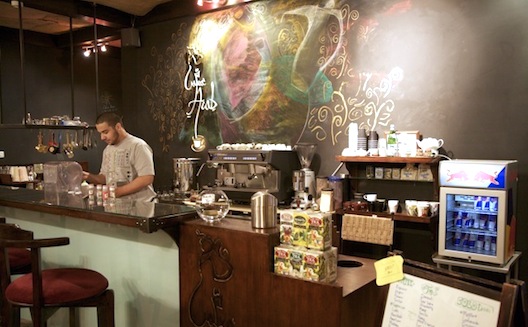 Last year, Wamda contributor Oubei Elkerdi asked whether coffeehouses could boost creativity in the Arab World. He argued that coffeehouses in Europe in the 19th century were “the hub for scientific and artistic conversation,” which allowed artists, scientists, thinkers, visionaries, and writers to connect and exchange ideas about projects in a diverse array of disciplines. One example he offers is Berta Zuckerkandl, an influential salonnière whose literary salon in Vienna at the end of the 19th century hosted such artists and thinkers such as Max Reinhardt, Arthur Schnitzler, Gustav Mahler, and Anton Kolig.

Yet, as he points out, the popularity of coffee and coffeehouses did not originate in Europe. In fact, coffeehouses originated in the Middle East and were popular there as early as the late 15th century. As the Ottoman chronicler İbrahim Peçevi wrote about the opening of the first coffeehouse in Istanbul: “Until the year 962 [1555], in the High, God-Guarded city of Constantinople, as well as in Ottoman lands generally, coffee and coffee-houses did not exist. About that year, a fellow called Hakam from Aleppo and a wag called Shams from Damascus came to the city; they each opened a large shop in the district called Tahtakale, and began to purvey coffee.” By the dawn of the 17th century, coffeehouses were present in Damascus, Cairo, and Mecca.

The violent transformation of the Middle East, and the dawn of colonization, wars, and political conflict indelibly altered discourse in the Arab world, in some regions causing thriving creative cultures, in others leading to a lack of public arenas for fostering innovation. This is most evident in places like Saudi Arabia, a place where there is no lack of human talent and ingenuity, yet there is an indisputable lack of venues to foster this human potential and boost creativity among youth. The problem here is not a lack of coffeehouses, as the country is awash with global chains and massive corporate coffee shops– the problem is a lack of the proper kind of coffeehouses.

As Elkerdi wrote in his 2012 article, “This age-of-enlightenment feel is lacking in most Arabic cafés where the free exchange culture is muffled by loud pop music and glaring televisions… what is true of many western coffee shops is not true of enough Arabic cafés, and if we want to see an age of innovation in the Arab world, then coffeehouses are a good place to start.”

Caféa Arab on King Abdullah Street in Khobar, Saudi Arabia, is a good place to start. Founded in 2008, the café is hosted within the Desert Designs complex, a 23-year-old veteran lifestyle store that specializes in selling Islamic art, local handcrafts, antiques, hand-woven carpets, and cultural items inspired by Saudi heritage.

On the second floor of the complex, next to the store’s art gallery, the café offers a colorful, friendly environment, furnished with local artwork and locally made, Arab-inspired chairs and cushions. The café’s staff, a small team of Saudi “shabab”, or youth, give the place a friendly vibe. The café’s management is actively promoting the concept of part-time jobs among Saudi students, something that is still on the rise in the Kingdom.

In addition, Caféa Arab constantly hosts intellectual and cultural events led by established men and women from different disciplines. Within the past few months, I’ve attended a documentary screening by an upcoming Saudi filmmaker, an open discussion by an established artist, and a fundraiser for a young Saudi woman working on a project to provide clean water for Ghanaian orphans. All events were hosted in that same modest venue.

The café’s co-founder, Raneen Bukhairi, is a connoisseur of culture and art. With an insatiable appetite for learning about Islamic and Middle Eastern art and culture, she’s always on the hunt for new works to display, new artists to host, and new people to meet. Her interest in Khaleeji artists and thinkers is evident in the decorations, the furniture, and the young talented Khaleejis who tend to congregate there.

Raneen can be compared to a more modest Berta Zuckerkandl, with her café serving as a modern salon for the region’s young talent. It is not out of the ordinary to come to Café Arab on a weeknight, and find yourself surrounded by students, expatriate and local professionals, a couple of upcoming artists discussing a project, and perhaps a local internet celebrity.

Caféa Arab is only one small venue; Saudi’s youth will need many more. Yet it is an excellent example of a place that can catalyze their creative ideation and hopefully inspire others to follow suit, in Saudi Arabia and the rest of the Arab World.