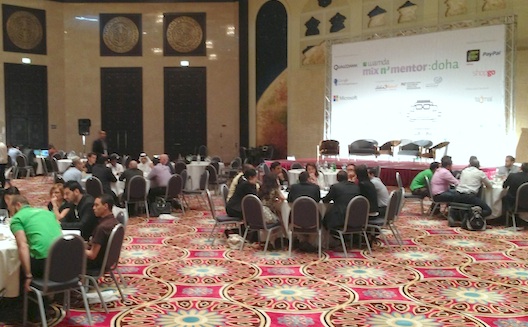 At Mix n' Mentor Doha, we gathered over 100 mentors and entrepreneurs for a half-day event that fostered in-depth discussions about team building and investment. A wide range of startups attended- some hadn't sought funding yet, while others had closed large series A rounds.

Previous MITEF Arab Business Plan Competition winner Hind Hobeika joined us, discovering along the way that she might want to find a founder. "The best session was one where I sat down with Louis Lebbos from Namshi, and had an  argument about how co-founders are cruical to you as an entrepreneur. Not having a cofounder is very difficult i find, but it's difficult finding one now at this stage of the startup." (Hobeika is well on her way, having recently launched an IndieGoGo campaign to fund her first prototype for Instabeat, a technology for swimmers that monitors heartrate).

"He insisted that there was no way no one would ever get me like a co-founder would... it made me seriously start a hunt," she said.

Meanwhile, Muhammed Mekki, Lebbos's co-founder, was enjoying meeting local talent in Qatar. "The diversity of the entrepreneurs, who hailed from all over the region, made this Mix n' Mentor unique," he said, "but one of the sharpest entrepreneurs I met was a Qatari named Omar Al-Ansari, who is planning to change the way financial traders in the Arab world communicate with his start-up, Borsa Arabia."

In an initial panel, members of PayPal, Google, Microsoft, and Qualcomm shared their advice, before entrepreneurs later asked mentors and each other about the best ways to build and scale. Here are 10 pieces of advice from the day:

Join us for Mix n' Mentor Bahrain, Amman, and Riyadh up next, on May 11th, 24th, and 30th, as well as our Wamda 4 Women Entrepreneurs Roundtables alongside the Mix n' Mentor events.