Every year, Egyptian parents face the dilemma of choosing a school to enroll their children in, often debating between a range of expensive international schools or deteriorating Egyptian public schools, with little in-between.

To create an affordable alternative, one educator is taking it upon herself to provide low-cost, high quality education. When I first spoke with Fatima Basahi, a Yemeni who lives in Egypt, I immediately sensed her passion for a quality education.

With a Masters in Engineering from Cairo University, Basahi began her career by helping to establish the Faculty of Engineering at Sanaa University in Yemen. After gaining experience designing curriculum for London King University and participating in international education conferences, she began to work in the UAE, developing new grade school curriculum by working with Al Manar, a regional educational services company. 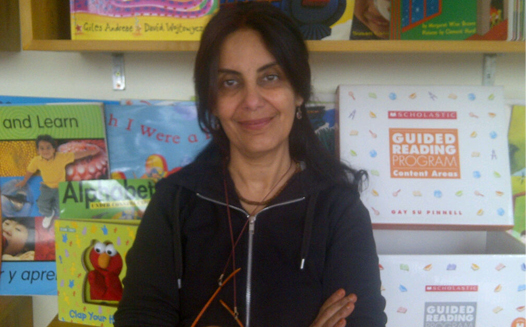 When Basahi arrived in Egypt two years ago, her path was altered by a random act of violence; she had came to run an international kindergarten called Infinity, but soon after she started, the center was robbed.

Unable to survive, it later closed, and she considered leaving Egypt. Yet just as she was about to pack up, three Egyptian investors, who manage educational services company High Score, asked her to stay to develop and run a new school they were creating.

Basahi immediately said yes and, after a year of studying the Egyptian Ministry of Education’s curriculum, she launched the Green Community School in 2012, to offer an alternative quality education for Egyptian students.

“Public school students are not treated fairly,” says Basahi, who insists that each school have its own philosophy, mission and perspective, whether it is international or Egyptian. She adds that the only goal of educators should be to create an environment that allows teachers to truly empower their students.

Basahi is more than a little disappointed by what she calls the “big business” international schools in Egypt, which cost parents huge sums of money without always providing a great education. The Green Community School seeks to provide a “national” alternative, at the price determined for public education by the Ministry of Education (no more than $2000 per student per year for high school).

The Art of Teaching

The school, which first opened in September 2012 with only seven students, will offer free trial courses until it receives an official license from the Egyptian government. Located in Saft El-Laban, in the Kerdasa area of Giza, it provides a huge garden where students can play and escape the bustle of Cairo.

While a public school must adhere to the public curriculum, Basahi is finding other ways to innovate. “The Ministry chooses the curriculum, but not the specific teaching methods, thankfully leaving the door to creativity open,” she explains. She continues to develop interactive new curricula, so that traditional education methods comprise only 30% of the day; the rest is devoted to small group activities.

When it comes down to it, she says, the failure at Egyptian schools is not the curriculum, but how it's being taught; schools can be successful on the whole if they start to innovate, try new methods, and teach students how to use technology alongside their curriculum.

For many, it's a welcome change. Nada Samra, the school’s administrative assistant and project coordinator, moved her twins from an international school to the Green Community School because of what she described as an improper environment. “Teachers were letting their students cheat, and sometimes teachers even beat students. Over time, I noticed that my kids started using inappropriate language that they never used before when they came home from school,” she says.

While not all international schools are to blame, Samra adds that such behavior takes place when a school's is motivated by profit rather than education. She has since helped Basahi develop more recreational activities, including rock climbing or recycling lessons. Soon, the school will offer musical instruments.

Today, the Green Community School only offers elementary education, but Basahi hopes to expand quickly to add high school next year. Next September, pending Ministry accreditation, the school will officially open its doors for more than 200 registered students.