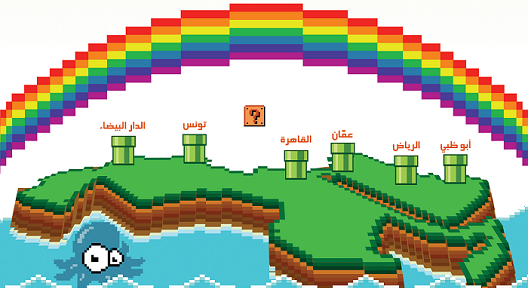 This week, GameTako announced the winners of their 3rdannual Game Zanga, which drew over 325 developers to compete across the region to build an original online game from scratch in just 96 hours. The original concept for the Game Zanga, a type of "game jam" or developers competition, was first thought up by the game developers community in Egypt.

As the competition has grown, the regional community has pitched in to design the branding materials, organize venues and push the whole concept forward, according to Samer Abbas, Game Zanga organizer in charge of developer community management. "There's a vibrant active community behind it, that's making the experience as exhilarating and magical as it is for us,” he adds.

Sponsored by Unity Technologies, GameMaker, Stencyl and Scirra, the Zanga was held from March 14-17th. Participating developers could work from their home or studio, or join other participants at one of six physical locations in Amman, Riyadh, Cairo, Casablanca, Abu Dhabi and Bahrain. Most developers competed from Saudi Arabia, Egypt, Morocco, and Jordan, but the Zanga saw representation from across the Arab world, and even in the diaspora from Arab developers in Germany and China.

As it turns out, Morocco had some of the strongest competitiors. “Morocco actually has one of the most mature game development communities in the Arab world; it's mature and well organized,” says to Abbas. “Once you know that they've had a Ubisoft studio in Casablanca since 1998 it comes as no surprise.” Two Moroccan games tied for 3rd place.

Participants competed for license giveaways, Sony PS Vita consoles, and free tutorials from Design3; plus a year’s worth of regional bragging rights. Although no cash prizes were awarded this year, GameTako saw a record number of games developed, judged based on six criteria: theme, originality, fun factor, sound, graphics, and overall performance.

“This year the emphasis was more on developer representation in the jury,” says Abbas. The seven judges included a mix of game specialists and experienced developers in the Arab world, including representatives from IGN Middle East, Saudi Gamer, Ubisoft, Gameloft, and Electronic Arts.

In the end, the developers created over 60 Arabic games, though a few were disqualified for going over the time limit. You can find and play all of the final entries online here.

The 3 Game Zanga overall winners are:

Developers were also awarded for:

Abbas’ own game, Loss, wasn’t eligible to win for obvious reasons, but it has a pretty cool idea: instead of finding power-ups, players lose abilities as they progress. For those who don’t speak Arabic, one game which didn’t win any awards, Invisible Objects, is available in English here.

GameTako, which is now an initiative of N2V, will continue the Game Zanga tradition each year, hoping to attract more and more Arab game developers across the region and in the diaspora.

Photo: The "first 8-bit Arab World map", according to GameTako.