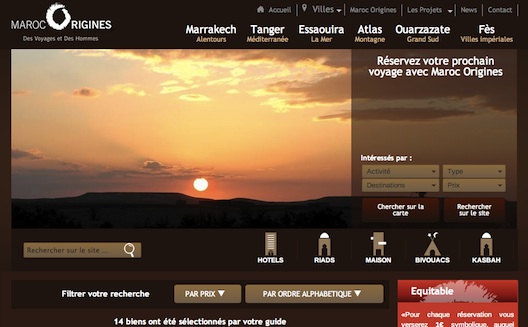 Over the past few decades, tourism has been an increasingly important source of revenue for both Morocco and Tunisia. Both countries are known for their breaktakingly beautiful sights and the authentic, local feel that only a home-run riad or guesthouses can offer. In 2010, the sector accounted for 7% of GDP in both countries Tunisia and Morocco.   The Arab spring, however, took its toll, especially in Tunisia, where the number of tourists visiting Tunisia during January and February in 2011 fell 20.4% compared to the same time period in 2010.

Despite these struggles, the tourism industry is getting back on its feet with the help of a few local players. While online booking in the Maghreb is typically dominated by international sites, two companies in particular are reversing the trend.

To call Cyberesa the Travelocity or Expedia of Tunisia would be limiting; in an emerging market, it has not only launched the first online travel agency, Traveltodo, but also works to bring offline travel agencies online, by offering web and mobile solutions.

It's not that most riads and guesthouses don't have an online presence; most do. Yet they rarely offer online booking. Most travel agencies on the other hand, were traditionally offline. Since its launch in 2002, Cyberesa has built platforms for around 90% of the travel agencies that are currently online, says Wassim Ghliss, the company's director.  The same year, Cyberesa launched  Traveltodo.

With backing from Microsoft and Amadeus International, it has grown to serve 120,000 clients, while its mobile app, which launched at the end of 2011, has since seen 15,000 downloads- not bad given Africa's general smartphone penetration rate of 17-19%. “It’s the go-to website to book travels online” said a friend of mine.  Cyberesa expanded in 2009, opening an office in Morocco, and later in Algeria and Libya. Soon after in 2010, the company launched Cyberesa.info, a price comparator that features the agencies it has helped bring online- again, almost the entire market, according to Ghliss.

Offline booking is still very popular, however, as online booking still only accounts for five to 20% of sales made by Cyberesa’s clients.  Yet around 80% of bookings at online agencies are made by locals, says Ghliss, marking a shift towards internal tourism.

For those coming to Morocco for the first time, it's not only the brightly colored textiles, vibrant souqs, and beachfront views that grab one's attention. Another factor at play is the rampant poverty, which many tourists notice, but don't know how to alleviate, says Alexis Franco, the communication manager at Maroc Origines.

To solve that problem, Maroc Origines offers tourists the chance to donate to local charities as they book trips.

While most sustainable tourism agencies in Morocco offer unusual, off-track experiences like going backpacking in the Atlas, or living with a family in a farm, Maroc Origines is designed to “make [sustainable tourism] accessible to people who want to spend more classical holidays,” Franco explains, thus offering an experience that can’t be found anywhere else.

Within each booking, the clients, the hotel and Maroc Origines each donate one Euro (a total of three Euros) to a charity project featured on the site. To ensure that the money is put to good use, Maroc Origines has dedicated an independent team that solely focuses on choosing the organizations, which focus on health and education. The company aims to fund 5 to 10 projects with 10,000 to 15,000 Euros in 2014.

This year, the site plans to launch in English (it's currently only in French) and slowly add some local activities such as cooking classes and pottery workshops.

With these unique approaches, both Maroc Origines as well as Cyberesa are finding ways to keep the tourism sector afloat by creating sustainable solutions that hopefully transcend the inlfuence the Arab Spring.

The good news is that these models could be expanded to the rest of the region. In Egypt, Wild Guanabana has taken a similar focus on sustainable trips and volunteer tourism, and expanded to base itself in the Gulf. While there's plenty to focus on in North Africa, perhaps these sites will one day look to scale their models.