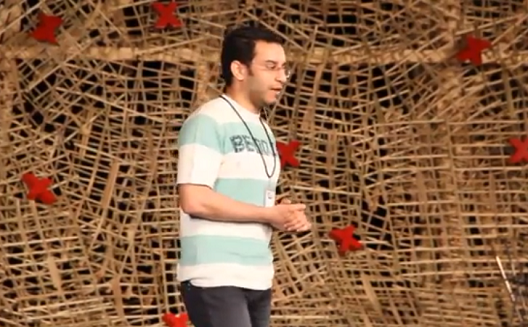 "In order to achieve true Artificial Intelligence (AI), we have to make machines that are able to acquire knowledge in a scalable way, without human interaction, then use this knowledge to understand, answer questions, think and reason," says Egyptian entrepreneur and AI researcher Haytham El Fadeel.

In 2008, El Fadeel started to build Kngine, which stands for Knowledge Engine, a semantic search engine that attempts to predict what a searcher really means when typing in a request. Conventional search engines navigate the user towards a particular web page or document, based on keywords, while a semantic search engine aims to understand the searcher's intent and the contextual meaning of terms, in order to give complete answers.

Some may think this is what Google already does, but El Fadeel believes that semantic search is actually much more sophisticated than anything done before in the field of AI. "The key here is the word 'knowledge', which is profoundly different from the word ‘data’ or ‘information,’" he emphasizes.

He offers an example: "If a human reads the sentence 'Jan 25 revolution forced Mubarak to step down' he will immediately recognize the event and link other facts to prior knowledge of Mubarak and Egypt to conclude the new fact that Mubarak is no longer the president of Egypt, even though it’s not explicit here." The engine tries to simulate how the human brain reads, understands new information, and links to existing knowledge.

Turning AI into a startup

As soon as El Fadeel saw semantic search technology begin to emerge in 2009, he quit his daily job at an Apple OS solutions company, Parallels Inc., and teamed up with his brother to turn Kngine into a fully-fledged startup.

In January 2010, the two brothers launched the first public prototype of Kngine and, 7 months later, Venturebeat tested Kngine against similar engines WolframAlpha and Powerset, saying, "Even Powerset, the semantic search engine bought by Microsoft two years ago, having raised $12.5 million in venture capital, fails to come close to what Kngine offers.”

The El Fadeel brothers originally struggled with funding, but continued improving the technology until January 2011, when they competed in the Global Entrepreneurship Program (GEP) competition and were selected as one of the two winners, from a pool of 105 applicants. This recognition helped them to secure funding from Sawari Ventures, which allowed them to hire a team and scale the product.

But it wasn't until June 2012 when Kngine released its very first smartphone app for iOS and Android, which was previously featured on Wamda, that the app earned an almost full 5-star rating on both Google Play and the iTunes App Store. In September of the same year, a consultant was contracted to conduct an independent benchmark, rating Kngine against WolframAlpha, Siri and Evi; Kngine answered questions twice as accurately as WolframAlpha and Evi.

"It's not surprising. We were working super hard and we were trying to solve the real core problem of making machines understand knowledge and use it to answer questions," El Fadeel says cheerfully.

"When I look 10 to 15 years in the future, I envision Kngine as the brain that will power robots and make them think," says El Fadeel. He believes that he is on track to build a machine that can understand emotion, react, think and reason within the next 5 to 7 years. "It's not just because we built the technology with so little money, or because it's made in Egypt, but because of its endless possibilities.”