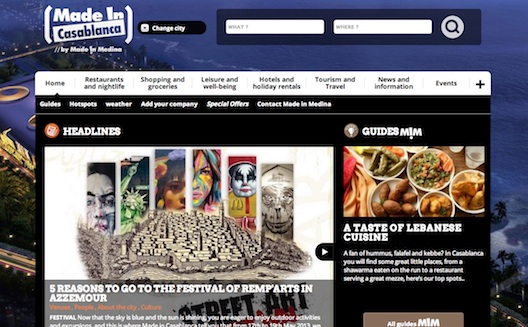 Famous Moroccan city guide Made in Medina  has now expanded to Dubai, Abu Dhabi, Beirut and now Bruxelles, Belgium. So how did a content company launched in Marrakech manage to build a global brand?

In 2005, Stéphane Gandibleux was a young entrepreneur building his web agency, Maroc Création, in Marrakech when he decided to create a city guide, named Made in Marrakech, as a side-project with some of his colleagues. In 2007, Gandibleux decided to take his website to the next level by having a dedicated full-time team and by selling ad space to local shopkeepers. The company took its time, went step by step, and made a name for itself. Two years later, the website was profitable.

At that time, in 2009, major players began to take notice, and Patrick Chassany, a French entrepreneur and business angel known in North Africa for launching Yala Music, invested in the startup. Thanks to the new cash influx, Gandibleux had enough funds to spin the media business off from his web agency, and launch it as a national portal named Made in Medina.

To start with a bang, the MiM team launched eight websites at once in eight Moroccan cities, hiring a freelancer or an employee in each city to write local reviews, tips and articles, while a head office in Marrakech managed marketing and development.

To gain viewers, they focus on creating quality, SEO-friendly content that could rise to the top of search results, while also building a following on the ground by sponsoring major local events, such as the Marrakech du rire de Debbouze, and the Festival du film d’Essaouria.

Expanding with a franchise model

As the website built steam in Morocco, the team didn't waste time expanding. In 2011, they launched in Tunisia, and followed with sites in Dubai, Abu Dhabi, and Beirut in mid-2012. In 2013, they re-designed the website, and expanded into Europe with their launch in Bruxelles; each new venture has been funded with existing revenues. 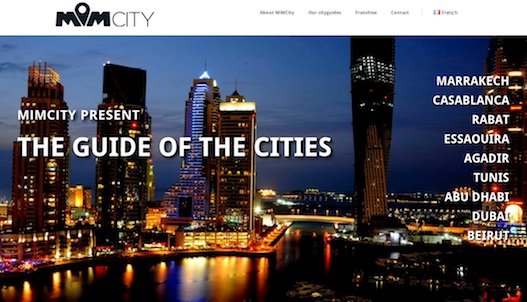 It's a big leap for the company, which began in a relatively unsaturated Moroccan market, with only a few competitors, like BestRestaurantsMaroc, or hotels.com and Maroc Origines for trip bookings, to enter crowded markets like Dubai and Beirut. Both cities have go-to city guides like TimeOut for events and Zomato for restaurants.

None of the three newest websites seem to get much traffic, but this may be intentional. Gandibleux's strategy is to take a year to create good content and build his SEO. Once they get to a comfortable level, the team plans to begin sponsoring events. But will it be enough to accelerate traffic? Perhaps Made in Medina is betting on its sleek, modern interface, and unique information such as B2B and B2C suppliers.

In the future, Made in Medina plans on opening a new  city every two to three months, in the Arab world or around the globe, under a franchise model. In fact, the company also plans to convert all of its current cities to franchise ownership.  “We’ll only keep our flagship city in Marrakech, and manage marketing, design and technology,” explains Gandibleux.

The team is now testing out new services, such as a real estate portal in Marrakech and Casablanca that offers listings from real estate agencies, in the context of local restaurants, shopping facilities, and events.  To differentiate themselves from the aggressive and successful slew of classified websites in Morocco, they want to offer higher quality listings.

A new event calendar-related service and a mobile app will also boost their avenues for reaching customers; now the company will simply have to ensure that its franchise model can scale successfully and maintain quality across the globe.