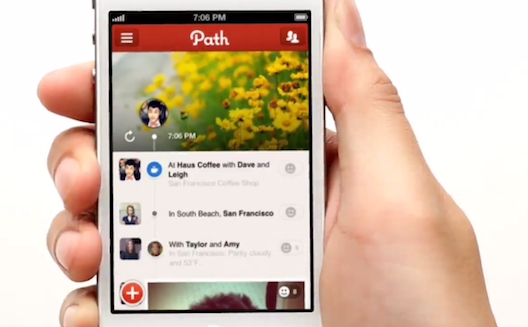 Two days ago, TechCrunch spotted a peculiarity on the French App Store. Path, the two-and-a-half year old social network almost no one has heard of, went from not even being one of the top 1500 most downloaded apps in France this April, to ranking at #740 on May 8th, to hitting #1 on May 11th and staying there for 6 consecutive days.

Path is a uniquely private social network that allows users to check in to places and share statuses, pictures, music with only 150 of their closest friends. The platform came under fire in late April for spamming users, comically calling and texting various contacts of at least a few users. It's also been blocked from accessing users' contacts on Facebook. However, apparently spam was not reported during the May surge in France, nor did the service use any advertisement beyond a few Facebook ads, says co-founder Dave Morin.

Even Gregory Pouy, the go-to analyst for everything digital in France, couldn't really find a reason. He discussed generic factors (smartphone penetration, old press coverage) and pointed out that Path was an answer to a growing need for privacy and authenticity on social networks. Is it enough to explain this bizarre success?

A surge in the Arab world

We did some investigation and discovered that Path had a similar fate in some Arab countries. On February 10th, the app climbed to the top 10 most downloaded overall apps in the UAE for 5 days, and then went back to ranking between 500th and 1000th overall.

The day after, on February 11th, something similar happened in Bahrain; the app hit the top 20 for eight days, and then dropped back down to ranking closer to 1000th for most downloaded apps overall. The surge could have been tied to the 14 February uprising celebration in Bahrain; perhaps protestors preferred a less conventional or more private social network to exchange information on over that week.

In Qatar, the app seems to be doing well, clocking in at around the 250th most downloaded app. For the last month, Path's ranking in Saudi was, on average, also in that range: not bad, but not suspicious.

In all of the other Arab countries, the app rarely makes it to the top 1500 for most downloaded apps overall, according to AppAnnie.

So why the sudden rise in France, and erratic behavior in the Gulf? After it was accused of spamming users on Facebook, Facebook restricted Path's access on May 3, 2013. By May 8th, Path couldn't have been spamming French users, unless the surge was a delayed effect of earlier spam.

It's also difficult to figure out who exactly is using the app. Pouy says it's a Paris-based phenomenon, but, in a quick straw poll of the early adopters I know there, who typically create accounts on all new social networks, only a few had opened Path accounts, and all uninstalled the app a year ago. So who's using the app?

Another possible explanation is teenagers.

We all know how teenagers are: they don’t want to have to do anything with their parents or any other grownups. That’s why they’re not using Facebook anymore, that’s also why they’re looking for new networks to communicate freely and privately.

We polled a few of our readers on Facebook as well; none of them were teenagers, but all predicted the death of Path:

"It is not too engaging regardless of its excellent design and features. Not too sure if it could survive naturally," said Rasha Ali,  from Ramallah.

Hatem Amin, an Egyptian living in Saudi who works as a graphic designer, agrees. "I don't think it will survive, although it was having a very promising beginning."

"It's a matter of time for it to die," concurred Wissam Aboueida, who works for business media company Terrapinn in the UAE.

Lebanese entrepreneur Abed Agha, founder of mobile entertainment platform Vinelab, noted that he was using the app: "Yes, but for how long?"

What about you, are you using Path? Who do you think is using it in general? Do you believe it could be the next Facebook?