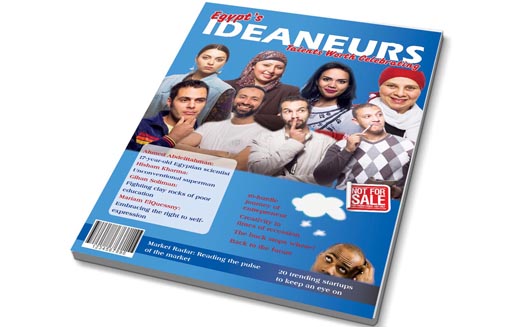 Entrepreneurship is about failure just as much as it is about success. That's the idea behind Ideaneurs, a new monthly magazine that launched last month to feature the ideas and talents of 10 young “ideaneurs” in each issue. Each issue will feature the failures that led these entrepreneurs to success, says founder and CEO, Ahmad Issa of Invenst Ventures Boutique.

Before supporting entrepreneurs, Essa began his career as an industrial engineer. After working in the marketing field for several international companies outside of Egypt, he returned to Egypt, and founded Invenst in 2011. The support organization offers training and services for ventures with a social impact, to help them attract venture investment.

The main purpose of Ideaneurs, then, is to serve as an entrepreneurship ambassador, revealing Egyptian talents to foreigners and potential investors, while also hopefully inspiring Egyptians to launch more startups. Essa hopes that by revealing the team behind a given company, Ideaneurs will serve as a bridge between investors and companies.

The current issue of the 110-page magazine includes 10 profiles of entrepreneurs, a "Mentors Corner," which offers a advice from a coach or investor, and articles on self-confidence and other skills that any entrepreneur should cultivate. It also includes a job offers section, popular projects in a “What’s Trending” section, and finally a “Matchmaking” service to connect business owners and investors. That last service allows business owners to directly ask for funding, specifying the equity offered in return.

The current issue also includes an infographic on the entrepreneurial journey, including its stages and the obstacles founders face. Each issue is printed in English each mid-month, and will be freely distributed in universities, gathering areas and cafes in Cairo. The magazine will also be available for download, and the Ideaneurs team is trying to develop a volunteer distribution network for outlying provinces, eventually scaling to other countries in the region as well.

Why insist on print?

In a digital era, Essa maintains that print hasn't lost its popularity yet, while websites are plentiful and hard to differentiate. Numerous websites that achieved initial success have rapidly closed, he points out.

The magazine, however, intends to quickly expand and build an interactive community between readers. In its first stage, Invenst will print 2,000 to 3,000 copies, intending to increase to 5000 in the coming months. Despite his aversion to a fully online publication, Essa intends to then build the website into an interactive platform where those interested in entrepreneurship can interact and form partnerships.

Thus far, the magazine depends upon advertisements for revenue; it will break even by the third issue next July, Essa hopes.