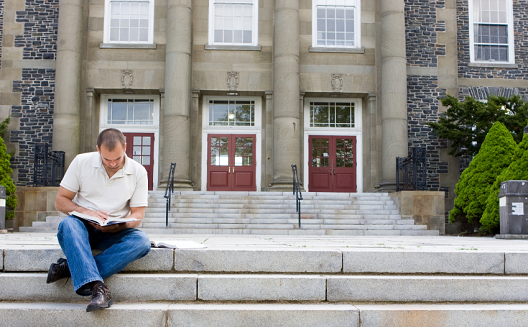 What does it mean to be educated? Nowadays, anyone who goes to school and receives a degree after spending a few years in university is stamped with the ‘Educated’ label. Traditionally, however, education took on a different texture altogether.

“Education,” said Robert Frost, “is the ability to listen to almost anything without losing your temper or your self-confidence”; and Mark Twain defined it as “the path from cocky ignorance to miserable uncertainty.”

These two definitions are not contradictory; they are complimentary. Good education makes you intellectually resilient and, like most activities of self-refinement, it is not a place (something that is ‘reached’ or ‘achieved’) but a continuous, lifelong process.

Modern formal institutions of learning do not quite reflect this understanding of education. Yet, self-mastery, nuanced thinking, and an appreciation of the arts have always been part and parcel of traditional education.

“The study of poetry was a direct study of morals and a method of propagating good moral characteristics,” writes Muhammad Atyia Al Ibrashi in Education in Islam. “The Muslim scholars considered the influence of poetic metres on the children’s minds, and implanted good qualities by this study. Through memorisation of moral poetry which was easy and pleasant, they gave the children aesthetic instruction and spread in their minds appreciation of fine arts.” Even to be in the Ottoman special forces one had to be able to write poetry in Arabic, Turkish and Persian, and one had to know the Qur'an by heart, says Shaykh Hamza Yusuf.

So why was I, as an engineering student, never encouraged to balance my analytical knowledge with knowledge in the arts? And how is this understanding manifest in our modern systems? The truth is, especially at university, the humanities and the arts are served as fast-food meals to those in science majors; they’re less important courses that we only need to ‘pass’.

In a post titled ‘The Need for an Arab Cultural Revolution’, Dr. Tariq Ramadan wrote: “Genuine liberation, the march toward dignity and democracy, requires a ‘cultural uprising’ in all dimensions of its popular, artistic, intellectual and religious expressions.” Truly, “no amount of reform, or of political freedom, will resolve the feeling of unease that has sapped the foundations of East and West alike.” In other words, without serious initiatives to ignite the indigenous arts and without a blossoming of local culture beyond intellectual constructs, there is no Arab “Spring”.

Today, most education reform conversations revolve around introducing new technology to the classroom, developing education apps (e.g. gamification), MOOCs, peer-to-peer learning, etc. But this is not really tackling the deep and hairy problems we are presently facing in our societies.

In fact, better access to learning tools may very well worsen our situation; consider the wise words of David Orr in his paradigm-shifting address where, referring to the Holocaust, he says: “the designers and perpetrators of the Holocaust were the heirs of Kant and Goethe. In most respects the Germans were the best educated people on Earth, but their education did not serve as an adequate barrier to barbarity.”

Hence, we come to a new realization: it is neither education nor culture that will save us, but education and culture “of a certain kind”.

This has already happened. As David Orr points out, the environmental crisis we are facing “is not the work of ignorant people. It is, rather, largely the result of work by people with BAs, BSs, LLBs, MBAs, and PhDs.” Therefore, the solution lies not simply in improving the tools of learning, but in rethinking the purpose of education and accompanying any form of learning with an ‘art’ that balances it.

Founded in Cairo in 2003 by cultural entrepreneur Mohamed El Sawy, El Sawy Culturewheel offers an excellent example. As a cultural hub that hosts seminars, workshops, art exhibitions, book fairs, puppet shows and film screenings, it is a third place par excellence; a point of intersection and mingling between artists and thinkers, young and old, that “cuts across all social sectors, all classes, and all trends of thought,” to borrow an expression from Dr. Ramadan.

Every year, the cultural center chooses a main theme for its events, explored from a variety of perspectives. This is a much healthier way of bringing out talented minds – and inspiring the public while speaking about relevant and pressing issues – than popularity contests like Arab Idol or Arabs Got Talent, which possess no cultural authenticity whatsoever. Dr. Ramadan wrote: “The ‘Arab problem’ was never simply one of the violent dictatorships that succeeded political decolonisation; it has always lain in the perpetuation of an alienating and paralysing, if not destructive, intellectual colonisation.”

To begin rethinking education, we first need to shift the focus of our discussions from developing or improving learning tools to rethinking the “minute particulars” of whole-minded education. Second, we need cultural entrepreneurs to create more informal hangouts like El Sawy Culturewheel and anchor their in-house activities in moral grounds.

There are plenty of technology entrepreneurs out there, but what we are in dire need of are intellectual bons vivants who can lift their local communities up with meaningful initiatives whose primary aims are to unlock local creative talents and encourage indigenous cultural expressions. So let’s get started.