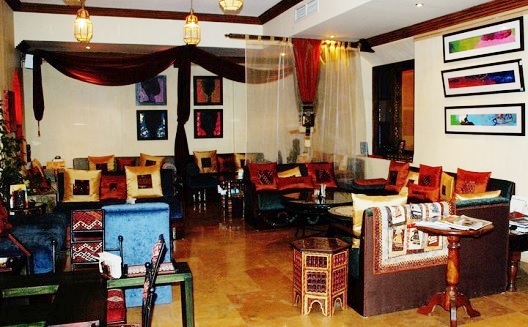 Informal learning is a critical part of our lives. Yet, many Arab cities no longer offer platforms for impromptu intellectual and social gatherings.

Malls have become the main hangout places in the Gulf, but they’re too high profile to allow for a real creative environment to bloom. The few bookstores in the region are often too formal to make room for vibrant conversations and the kinds of gatherings that lead to innovative ideas. Arabic cafés, too, are not suited for intellectual intercourse – what with the half-dozen glaring TV screens, loud music, and foggy air.

Yet, those “third places” that serve as an intellectual, creative, and political fora, are the foundation of a proactive and industrious community. Umar ibn al-Khatab famously established a space – known as al butayha’ – where people could engage in free discussions. For centuries in Baghdad, poetry gatherings and various classes took place at shops all across the city, and “there was hardly any part of the day when no classes were being held somewhere in the city”, says Munir-ud-Din Ahmed author of Muslim Education.

Third places have always been an essential component of healthy communities due to their natural ability to give birth to vibrant, fertile, and distinct atmospheres, and because they quench our thirst for exchanging ideas, learning, and even creating.

Caféa Arab is a great example; Wamda contributor Ahmed Al Majid describes attending “a documentary screening by an upcoming Saudi filmmaker, an open discussion by an established artist, and a fundraiser for a young Saudi woman working on a project to provide clean water for Ghanaian orphans”, all in this “modest venue”.

So what constitutes the DNA of these spaces, and how can we proliferate them in our communities?

In his remarkable survey The Great Good Place, Ray Oldenburg describes third places as “unimpressive looking” neutral spaces where “conversation is the primary activity and the major vehicle for the display and appreciation of human personality and individuality.”

The mood of the third place is a playful one, the décor is usually simple and psychologically inviting; for example, wooden tables and chairs generally have a homey feel that inspires longer and more relaxed discussions. High ceilings promote a creative ambiance while low ceilings aid in performing detail-oriented tasks that requires focus (it’s useful to know some basic design principles when talking about the interior design of third spaces).

I cannot overemphasize the importance of not having televisions and loud music in third places – and don’t even get me started on the hookah. Again, the quintessential element of the third space is conversation. Any distractions that take away from the “spiritual tonic” of the third space reduce its effectiveness in bringing out the best in the individuals who are present. Oldenburg mentions that “in some countries television broadcasting [was] suspended one night a week so that people will not abandon the habit of getting out of their homes” and mingling with one another.

But let’s push the idea of the third place even further.

Two of the major problems of our age are the absence of a sense of agency (especially among youth) and the overwhelming spread of consumerism as part of the fabric of many societies. And most of us are passive consumers who, in reality, have little knowledge or say about the inner workings of the devices we use.

Being able to use technology does not make one fluent with technology. MIT Professor Mitchel Resnick says “‘Digital fluency’ should mean designing, creating, and remixing, not just browsing, chatting, and interacting.” But we rarely find a group of students tinkering with a device in a coffee shop or a workshop.

Many of the entrepreneurial efforts and discussions in the MENA region are presently focused on creating better online tools and services. Yes, in fifteen years the Arab Digital Generation will form 38 percent of the total population of the Middle East, but I fear that most of this group will only be able to “read” but not “write”. Little work is being done to encourage young Arabs to experiment, make things, and design their own technologies. Dale Dougherty once proposed that libraries should purchase Arduino kits and make them available for everyone to borrow – like books –, play with, and then return.

How is this related to third places? When coffeehouses first emerged in the Middle East and in Europe, many of them had books that one could take off the shelf and read while sipping a cup of coffee or waiting for a friend. Around-the-corner bookstores always had areas where a few people could chat. Nevertheless, learning happens when we imagine and build things, and this is why we need to rethink the traditional third place and make room for more hands-on activities that could spark creativity and innovation.

In the end, what is really going to decide whether or not the Arab Awakening has succeeded is if we transform the role individuals play in the community. Maybe entrepreneurs should focus less on developing digital services and more on creating physical spaces for their local communities; who knows what new innovations could come of it?

When people are given the space to exchange ideas and create, they gain true ownership of their society and contribute in a meaningful way to its intellectual development. That’s why we need real spaces: to catalyse what physiologist Walter B. Canon describes as “the fecundity of aggregation”, or a collective and continuous creation of new ideas.