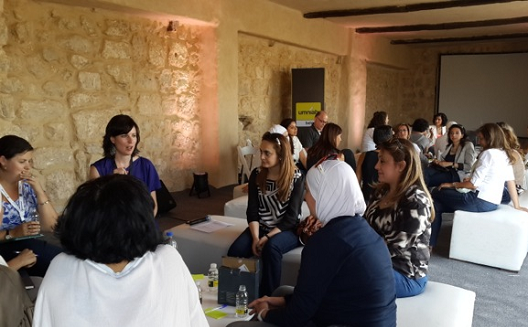 “I didn’t negotiate well because I was too shy,” one woman admitted at our Wamda for Women roundtables in Amman.

After finding that women suffered from negative stereotypes in Cairo and had to fight to be seen as equals in Qatar, women in Jordan seemed to agree that despite all of the progress that’s been made, they still- like women everywhere- struggle with negotiating for equal footing.

On the one had, women are a large part of the current boom in entrepreneurship in Jordan. Several of entrepreneurship's biggest advocates are women: Samar Dudin, the Regional Director at Ruwwad, a community empowerment initiative that helps disadvantaged communities overcome marginalization, Reem Khouri, Manager of CEO Operations at Aramex, is a force behind Corporate Entrepreneurship Responsibility and various initiatives to support entrepreneurs in Jordan, while Soraya Salti, founder and CEO at INJAZ, heads one of the few programs in the region working to build a culture of entrepreneurship at the high school level.

The tech sector in particular is filled with women starting up companies; at Oasis500, the region’s largest tech accelerator women comprise 35% of entrepreneurs and graduates.

For Ludwig Siegele of The Economist, the number of women present at Wamda's Wamda’s Mix n’ Mentor event stood out: it was around 30% women, while tech events in Silicon Valley often draw crowd that are closer to 10% women, he estimated.

Yet, step outside of the startup world, and women in Jordan still have a tough time battling social norms when it comes to work; only 14% of women in the Hashemite Kingdom are present in the formal workforce.

In the conservative communities that comprise the bulk of Jordan’s population, women often battle with their families for the right to take jobs. This is an issue that Mayyada Abu Jaber, the CEO of the Jordan Career Education Foundation, faces frequently after she’s trained women for positions. “Women are pressured by their families not to take jobs,” she explains. “Some families seeing working outside the home as dangerous for women.” It’s often only once salaries come above a certain level that the economic benefit is seen as outweighing the potential social cost (perhaps that bar will drop, for better or worse, if fuel and electricity subsidy cuts continue).

At our Wamda for Women roundtable, most of the women who gathered were members of the tech community, who have access to resources and are often encouraged to work by their families and partners.

That doesn’t mean they’re not up against challenges, as women are everywhere. But perhaps, especially in Jordan, internet entrepreneurship is part of the answer to creating a more level playing field. Salwa Katkhuda of Oasis500, for one, thinks so. As she told Chris Schroeder (author of Startup Rising: The Entrepreneurial Revolution Remaking the Middle East):

“Women have had real challenges — male bias, lifestyle balance, limited role models, and even limited access to basics like a proper transit system. But the Internet has transformed our opportunities. It has allowed for more flexible work options (freelance, remote, and home-based work). It requires low capital needs and allows women to more easily be their own bosses. All kinds of resources are literally at their fingertips for free or low cost.”

Most of the women at our W4Women roundtables would agree. One major theme that emerged was that negative stereotypes of women exist, but it’s much easier to negotiate as an equal in the tech and startup culture than it is in more traditional sectors like real estate, where women stand little chance of being able to bargain for themselves, let alone stand up for other rights.

Our three discussions focused on Role Models & Stereotypes, Life/Work Balance, and Finance and Negotiating. Here are some of our major conclusions:

The stereotypes they face are:

Not all women want to be leaders, in fact, but for those who do, “99% personal determination is required to make things happen,” the group concluded.

On the finance and negotiation table, three main issues came up:

In general, being a woman did not make it harder to find funding. Of 9 women on the table, 3 had secured funding or were pitching; one sought funding from a bank, two from institutional investors, and one from friends and family.

Although norms are shifting and women are more often expected to pull their weight financially in relationships, those who are supported by their families and husbands can often take on more risk and are more available to start a company then their husbands, the women concluded.

The table discussing work/life balance came and joined the finance and negotiation table halfway through, once a few people had to leave, and yet in their early discussion, women came to a few conclusions about what will enable them as entrepreneurs .

Overall, most of the women (7 out of 8; 88%) said that being given flexibility and a supportive work culture was one of their biggest challenges Although none wanted part-time work, 100% of the women said that needing support at home was a challenge, and that finding the right partner was critical. 7 of 8 said that technology could make the balance easier.

Overall, the entrepreneurs and businesswomen on our tables in Jordan came to the same conclusions as those in Qatar and Cairo: “Our current generation is a changemaker.”

As Jordan enters a period of economic transition over the next few decades, the rise of women will undoubtedly transform its landscape.

Stay tuned for our results from Riyadh, and sign up to our Facebook Group, Google+ community, and LinkedIn group to learn more.