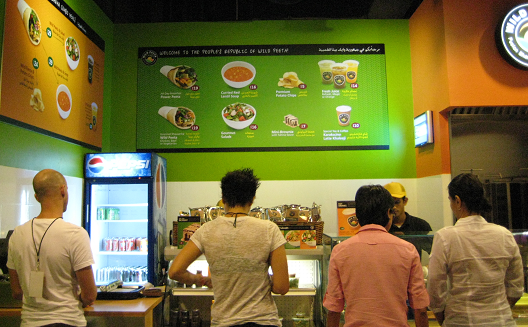 This is the third post in our new case study series, in partnership with the El Khazindar Business Research and Case Center (KCC) at the American University in Cairo's School of Business, Wamda and Aramex, featuring an in-depth look at 12 leading startups from Egypt, Jordan, the UAE, Palestine, and Lebanon, highlighting their startup stories, major challenges, and future plans.

The case study explores the journey of Wild Peeta, a gourmet shawarma restaurant startup that believes strongly in “serving healthy food swiftly.” Brothers Mohamed and Peyman Parham Al Awadhi started the company in Dubai in 1997, looking to reinvent the traditional shawarma sandwich with an international flair.

With an ambitious vision to provide healthy, fresh and tasty sandwiches and salads, the team had trouble competing with the likes of McDonald’s and KFC who are able to use mass-produced frozen ingredients to keep costs down. After fighting to find funding, the brothers opened their first restaurant in 2008 with the goal of opening two more locations in Abu Dhabi and Al Ain and later franchising to 100 locations by 2015.

But things didn’t go how they expected. In 2011 they did open two new locations in Dubai, after closing their first spot, but neither took off. They decided to close shop, regroup, and try again in 2013.

The case study details the team’s lessons learned including changing their pricing structure, moving to new locations, solidifying a target market, competing with cheaper competition, and how to scale correctly. Though they have hit some major milestones, including serving more than 50,000 customers in 2010, profits just didn’t reach the levels needed to make the project worth it.

Now they’re reworking the concept and vision to try again later this year, building on their past mistakes, and relaunching to provide a fresh alternative to fast food from the Emirates.

Check out the full case study by KCC and Aramex in the grey box to the right to learn more about Wild Peeta’s story.