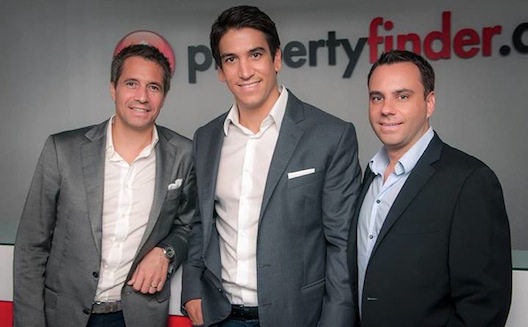 Last week, propertyfinder.ae solidified its position as a startup to watch, closing a round of series A funding led by BECO Capital and various heavyweights from Turkey, Asia, Dubai, and Silicon Valley.

Total investment in the Dubai-based real estate portal is rumored to be in the solid single digit millions, with BECO rumored to have put in at least $1 to 2 million (unconfirmed).

Those joining the round include Evren Ucok, co-founder of Turkish successes Trendyol and Peak Games, Patrick Grove and Shaun Di Gregorio of iProperty Group, a leading property portal in Asia, Mustafa Abdel-Wadood, CEO at Abraaj Capital, and a few unnamed investors in California, all of whom will help the startup expand from the UAE into the Arab world and Africa, says founder and CEO Michael Lahyani. [Disclosure: Wamda was launched by Abraaj Capital].

Yet the startup's path to success has hardly been easy; four years ago, it was on the brink of shutting down.

Lahyani wouldn’t be where he is today if he hadn’t wrestled it out of the hands of REA Group, an Australian real estate advertising company owned by a subsidiary of NewsCorp, the multinational media company run by Rupert Murdoch.

When he first launched the startup in 2007, it was a freely distributed print magazine called AlBabWorld. At the time, it struggled to compete with Gulf News classifieds. “Gulf News had ad clients locked in to exclusivity agreements, by offering discounts as high as 92%,” Lahyani explains. “They started calling those clients and pointing out that they couldn’t advertise with us, or they would lose their deals.”

Just as AlBabWorld headed for closure, however, REA Group came calling. To the real estate giant, which was expanding beyond the massive success of its site realestate.com.au, AlBabWorld looked like a great fit in the Middle East.

The group ended up acquiring 51% of the startup for a reported $1 million, later investing another $2.1 million into it. “They saved us from bankruptcy,” Lahyani admits.

AlBabWorld then relaunched as propertyfinder.ae, tackling the online space, where offline ad contracts didn’t apply. Over the next two years, Lahyani and his team continued to run the portal, which monetized by charging subscription fees. “We learned from the best,” he says.

"The recession was good to us"

In 2009, the global financial crisis hit, and REA Group wanted to pull out of Dubai. Propertyfinder.ae wasn’t yet profitable, but its owners demanded: break even by the end of the year or else.

“I would have had to fire half of my team to do that,” Lahyani explains. “At the time, I thought that was the wrong decision.”

He also knew that Dubai would recover. REA didn’t. “They didn’t understand Dubai. They dismissed it as ‘just a bunch of Arabs spending money,’” he quips.

Admittedly, he didn't try too hard to convince them of the opportunity; by agreeing that it was a doomed venture, Lahyani was able to buy back 51% equity for less than the amount REA Group had initially paid him for it, and retain his team.

Then, he describes, the recession began working in their favor. “The beauty of the crisis was that agents suddenly didn't have the revenue to advertise on print, so online became the answer. Clients realized that we could provide leads at a cheaper cost than print.”

That sense of loyalty has helped the team band together and execute to this day, says Lahyani. “When we came out of that moment of crisis, everyone was really connected. We were like a family. Today, there are still a lot of people who were with me from the beginning, including my partner, Renan Bourdeau.”

After a successful venture into the Qatari market, which was “small” and “not too scary,” Lahyani applies the same optimism he had during the economic recession to Egypt. “Despite what everyone thinks, property is booming in Egypt. The pound is dropping, so it's becoming more affordable for expats, and locals are also putting their money into real estate.”

In Egypt, propertyfinder.ae has also hired an ex-Rocket Internet MD, Youssef Zikri, who ran Mizado before its abrupt closure, to execute swiftly in the massive market. By the end of the year, it hopes to have launched in 9 markets.

“It’s an execution game,” Lahyani explains. An ex-Rocket employee knows that as well as anyone, he says. “It’s just an execution style that you have to adopt.”