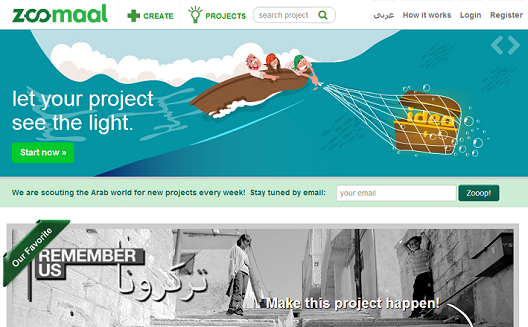 For those who aren’t familiar with the crowdfunding model, first introduced by Kickstarter in the U.S., Zoomaal offers a place for people to find funding for very specific products or projects across a variety of categories, through a large amount of small investments. Each project offers a series of rewards or perks for different support levels to give backers an incentive to get involved. If a project doesn’t reach their requested funding level within their set time limit, the money is reimbursed to backers.

At their launch, Zoomaal has 10 new projects on the site including a documentary detailing the stories of Gazan refugees in Jordan, bracelet hardware that senses sounds for deaf users, and a coworking space in Egypt. The site also shows an easy overlaid tutorial for new users which can be accessed from every project by clicking “Start Tour.” 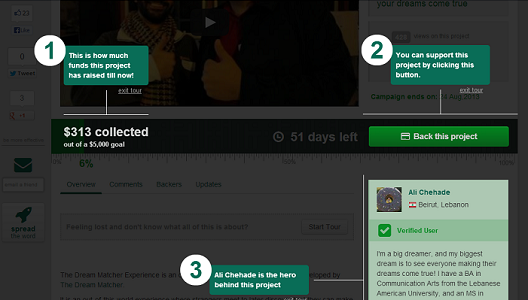 While the startup follows the Kickstarter model pretty closely, with all-or-nothing funding criteria, it does offer some key tweaks for the Arab world. Although the color scheme is pretty similar, the design is altered a bit to highlight a project’s current funding level with a ruler that fills up depending on how much funding is received. Each project’s page also offers more social sharing features than Kickstarter, making it easier for users to comment about a project, see which of their friends have supported it and how many people have viewed or shared a specific project.

After funding a project, backers are encouraged to share their support through a little gamification; if users invite enough friends, they can fill in the letters of a secret message before posting to Facebook.

The challenge of payment

The key question for any sort of crowdfunding platform, especially one targeting the Arab world, is which payment gateways it will use; Kickstarter and Indiegogo have traditionally offered very limited payment options for backers in the Arab world.

“If I have a project and I raise $20,000 and I want to receive this money in Egypt, other crowdfunding platforms may have difficulty sending the money to Egypt,” says founder Abdallah Absi explains. Not so on Zoomaal, which will offer 12 payment options, including CashU, Cashi, Cashna, Dixipay, Filspay, and Ukash, through a partnership with Gate2Play, as well as taking PayPal and credit cards.

They're also banking on expat support, as the payment gateways make it easier to transfer money from abroad. “We’re looking for Arab expats to fund these projects,” says Absi. “The main incentive for these people is to give back to their communities, which they can do very easily through Zoomaal.”

This shows in the fact that the website is currently in English, although the team plans to launch an Arabic site next month, offering bilingual listings for each project. 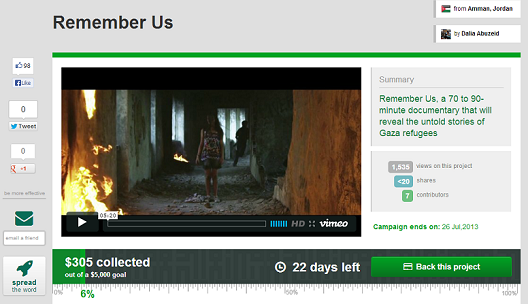 To be successful, Zoomaal will have to ensure that each project can deliver on its promises, which could be difficult in a market with high international shipping costs.

I backed a project for just $10 to test it out and was promised a notebook as a reward; we’ll have to see if that team will ship from Egypt to Lebanon, even though it’s likely more expensive than my pledged $10, and probably closer to $40. Who pays the difference is unclear, and this could be a factor that future projects stipulate differently.

To ensure startups are both viable and accountable, Zoomaal, runs them through a rigorous two-step verification process, Absi explains. First, the team ensures that the pitch, video, text, and amounts are realistic and accurate, and verifies that the project leader is actually involved. Second, after the funding is raised, Zoomaal requests a copy of the project leader’s identification and proof of their affiliation to ensure that the money is being sent to the right person.

It’s a lot to manage for a small team of three, but if Zoomaal can pull it off, a lot of projects will benefit.

As Zoomaal celebrates its launch tonight in Beirut, its team unveil several new projects, including a campaign launched by popular local band Mashrou3 Leila, to fund its next album; join us at the newly launched Coworking +961 at 8pm.